You see, the G7 ThinQ is the first smartphone with an iPhone X-style front notch from a well-known manufacturer that sells devices in the United States. So how does the G7 ThinQ measure up to the iPhone X? Read on and watch the video to find out.

Subscribe to the MacRumors YouTube channel for more videos.
Other companies like Essential, Huawei, and Chinese manufacturers have previously launched smartphones with notch designs, but LG's newest device is the highest-profile smartphone to get a notch, and it's the first notched device that's going to be widely available in stores aside from the iPhone X.

Because of the notch included at the top, LG's G7 ThinQ looks quite similar to the iPhone X. As is the style these days, it features a glass and aluminum body, a smaller form factor, minimal bezel, and a 6.1-inch display that's nearly edge to edge. 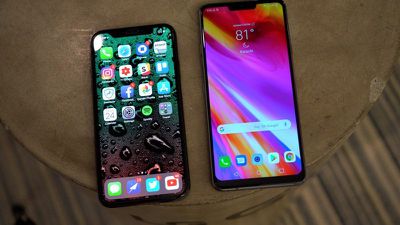 Unlike Apple, LG hasn't quite mastered maximizing screen space. While the bottom of the iPhone X has no bezel, there's a small chin on the G7 ThinQ. And, of course, at the top of the G7 ThinQ is the infamous notch, which allows LG to get more vertical screen space while still including front-facing camera equipment.

The LG G7 ThinQ has a smaller notch than the iPhone X, and that's because the notch isn't doing quite as much. The iPhone X notch houses the entire TrueDepth camera system that enables the secure Face ID biometric authentication that Apple uses, and the G7 doesn't have an equivalent feature.

Sure, there's a front-facing camera and an option to use face unlock, but it's not the secure 3D-based facial recognition Apple uses - instead, it's much less secure and can be used solely for unlocking the smartphone rather than verifying mobile payments or replacing passwords.

LG did do something with the notch that Apple didn't - rather than forcing customers to embrace the design, LG gives customers the option to turn off the notch and hide it within a more traditional status bar.

LG's ThinQ G7 is a decent Android device that has a premium look and feel and many of the features expected of flagship devices: a fingerprint sensor, 16-megapixel dual cameras, a dedicated assistant button (for summoning Google Assistant), water resistance, an AI camera feature to improve photos, and a powerful processor.

As with most smartphones, the question of whether it's "better" than the iPhone X largely comes down to ecosystem preference. Those who enjoy the openness and customization available on the Android platform will prefer the G7 ThinQ to the iPhone X, while those who are committed to Apple's ecosystem will see the iPhone X as the better device.

What do you think of the G7 ThinQ's notched design and the overall trend toward embracing the notch as a way to maximize screen real estate? Let us know in the comments. Stay tuned to MacRumors because we'll have a detailed comparison of the G7 ThinQ camera and the iPhone X camera coming.

gsmornot
I skipped the iPhoneX this year, mostly due to the notch.
Score: 12 Votes (Like | Disagree)

TheBruno
I find it hilarious there's so much fuss over the notch. Petty isn't a strong enough word to describe the obsession over it.
Score: 10 Votes (Like | Disagree)

ghost187
At least the iPhone X doesn’t have a notch AND a bezel!
Score: 9 Votes (Like | Disagree)

nviz22
LG’s smartphone division is irrelevant these days. Just trying to copy Apple. No software support, plenty of hardware issues, and high prices off the bat.
Score: 9 Votes (Like | Disagree)

Let's be honest...there's two players in this game: Apple and Samsung. Just like its only iOS and Android.

I mean, Google, is trying with their new phones, but you rarely see any in the wild.

HTC, Motorola and LG are pretty much irrelevant now a days.
Score: 9 Votes (Like | Disagree)

Rogifan
What’s the point of a notch if there’s still a chin?
Score: 8 Votes (Like | Disagree)
Read All Comments