Apple today released iOS 11.3.1, the thirteenth official update to the iOS 11 operating system. iOS 11.3.1 comes nearly one month after the launch of iOS 11.3, an update that introduced a Battery Health feature for keeping tabs on your iPhone's battery status, Business Chat for Messages, new Animoji for iPhone X, and more.

The iOS 11.3.1 update can be downloaded for free on all eligible devices over-the-air in the Settings app. To access the update, go to Settings --> General --> Software Update. 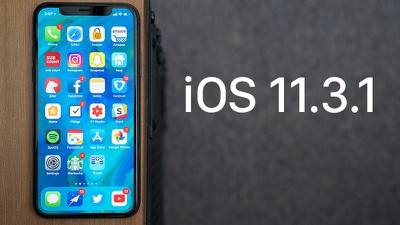 iOS 11.3.1 introduces performance improvements and bug fixes for issues that have been discovered since the launch of iOS 11.3. The update includes a fix for a bug that caused third-party repairs done on iPhone 8 models using aftermarket parts to disable the touch functionality of the screen. From Apple's release notes:

iOS 11.3.1 improves the security of your iPhone or iPad and addresses an issue where touch input was unresponsive on some iPhone 8 devices because they were serviced with non-genuine replacement displays.

Note: Non-genuine replacement displays may have compromised visual quality and may fail to work correctly. Apple-certified screen repairs are performed by trusted experts who use genuine Apple parts. See support.apple.com for more information.

The iPhone 8 and iPhone 8 Plus repair issue was discovered following the release of iOS 11.3. After updating, some iPhone users that had sought display repairs from non-Apple service providers saw the touch screen functionality of their devices disabled, resulting in serious headaches for repair shops.

At issue was a small microchip in the display, which disabled touch functionality after the update. At the time, it was not clear if the non-functional displays were a bug or a deliberate move by Apple, but it appears it was a bug. While Apple is fixing the display problem via the iOS 11.3.1 update, the company's release notes encourage customers to seek out authorized providers and genuine parts.

apolloa
So it was a bug.... not an intentional block to third party repairs.. conspiracy theorists will be upset haha.
Score: 21 Votes (Like | Disagree)

coolaaron88
Good on Apple for doing this
Score: 16 Votes (Like | Disagree)

So it was a bug.... not an intentional block to third party repairs.. conspiracy theorists will be upset haha.

... or they decided that the public backlash wasn't worth it and cancelled an anti-repair initiative.

Conspiracy theories are more resilient than that.
Score: 14 Votes (Like | Disagree)

oghowie
Did they fix the iMessage bug yet? I still get messages showing up out of order. Never fixed in 11.3.

It's a pretty major bug and annoying as hell.
Score: 11 Votes (Like | Disagree)

Is the display issue the only thing in this update?

Nope, there are other security fixes as well...