Snapchat today began implementing Apple's TrueDepth camera technology in its Lenses selfie feature for the first time. The silent update means iPhone X owners who use Snapchat will see augmented reality masks pop up in the app that make use of Apple's advanced facial mapping technology to superimpose the mask onto the user's face more realistically and track motion more accurately. 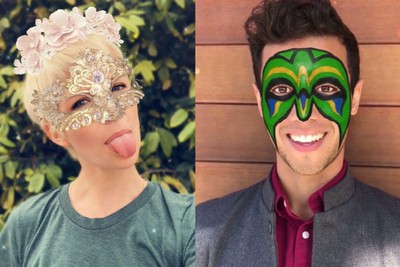 Apple first demoed the AR Snapchat Lenses at its iPhone X event last year, as part of its on-stage TrueDepth technology unveiling. Apple's Animojis work using the TrueDepth camera. Face ID also uses its structured-light technique to project a pattern of 30,000 laser dots onto a user's face and measure the distortion to generate an accurate 3D image for authentication.

Apple says the Face ID mathematical image data is encrypted upon generation and never leaves the smartphone's Secure Enclave. Third-party app developers are however able to access TrueDepth's visual face maps separately, including a live read-out of 52 micro-movements in the eyelids, mouth, and other features. At the same time, Apple explicitly forbids this data being exploited for user profiling or ad marketing purposes, but that hasn't stopped privacy advocates and some developers from raising concerns about third-party app access to the TrueDepth Camera.

At present there are three Lenses that utilize TrueDepth, demonstrating closer tracking of facial expressions and head movement. Snapchat says the TrueDepth camera also lets it blur the background and more accurately apply small details and 3D objects, which reflect and react to ambient lighting to project shadows and add highlights. The TrueDepth Lenses only appear for iPhone X owners and more of the AR masks are likely to appear periodically in the future.

Snapchat is a free download for iPhone and iPad from the App Store. [Direct Link]

to superimpose the mask

I’m so glad I couldn’t care less about Snapchat.

You could. If you couldn't care less you wouldn't bother taking the time to comment. ;)
Score: 18 Votes (Like | Disagree)

More garbage, what happened to you Apple? SAD.

You know the article is about Snapchat, right?
Score: 18 Votes (Like | Disagree)

BruceEBonus
At last! My self centred attention seeking lifestyle will love this. As will all my “friends” be impressed with me when they see me with funny things stuck on my face - like before. But more realistic. And that. Pass me the £1250 please Parents so I can truly fulfil and truly justify the reason for my existence on this earth.
Score: 16 Votes (Like | Disagree)

More garbage, what happened to you Apple? SAD.

Yes, Apple are releasing updates to an app they don't own or develop.
Score: 16 Votes (Like | Disagree)

bbednarz
Contrary to popular belief, technology can be used to have fun... Not every feature needs to be some super ultra pro only version that only "professionals" will use... No I don't use snapchat and have zero need for this, but my god... Let people have some fun...
Score: 15 Votes (Like | Disagree)
Read All Comments

Monday June 14, 2021 12:50 pm PDT by Juli Clover
Some M1 iMacs appear to have a manufacturing defect that causes the display to be mounted on the stand in a way that's not perfectly aligned, leading to a crooked display. YouTuber iPhonedo over the weekend published a review of the M1 iMac, and he found that his machine appeared to be tilted on one side, a mounting disparity that was visibly noticeable and proved with a ruler. Another...
Read Full Article • 267 comments

Tuesday June 15, 2021 3:41 am PDT by Tim Hardwick
Apple in iPadOS 15 has added the ability to access NTFS-formatted media from within the Files app. The additional support for the Windows-related format, first discovered by YouTuber Steven Fjordstrøm, is read-only, so like on macOS you can't modify files stored on NTFS devices, but you can at least copy any data on them for working on elsewhere on your iPad. The Files app has also gotten a...
Read Full Article • 84 comments

Sunday June 13, 2021 11:31 am PDT by Sami Fathi
Apple will no longer require vaccinated customers to wear masks inside their retail stores in the U.S, a major shift in policy compared to last month, according to Bloomberg. The new change, expected to go into effect on Tuesday, will no longer require customers who have been fully vaccinated against COVID-19 to wear masks inside Apple Stores in the United States. Bloomberg notes that Apple...
Read Full Article • 525 comments