Apple issues RSUs to its executives as bonus compensation, with the restricted units vesting after a set period of time as long as the employee stays with the company. 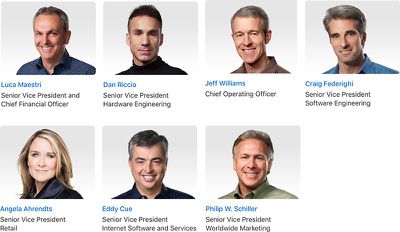 Shares received by each were originally awarded on March 3, 2014; October 17, 2014; and October 5, 2015, with Riccio, Williams, Cue, and Schiller receiving stock from all three dates and Maestri, Ahrendts, and Federighi receiving stock from the October awards. The March 2014 award has now fully vested for employees who received it, while employees who received the other two rewards will see additional shares vest on April 1, 2019 and April 1, 2020.

A portion of each award was withheld by Apple to satisfy tax withholding requirements on vesting of restricted stock units.

I hope Eddy got the lion's share of it. Apple is nothing without Mr Cue.

Blackstick
I’m amazed how many people here most likely earning less than $150k are defending the insane compensation these folks get. They don’t do the work at all, not even their VPs do much. It’s their directors, senior managers, line managers and Team Leaders getting their individual contributors to move the needle and keep the gears moving.
Score: 6 Votes (Like | Disagree)

Good for them, they certainly earn it.

Please tell me what Eddy does and has done that is worth anywhere CLOSE to $5 much less 22 million.
Score: 6 Votes (Like | Disagree)

69650
The gravy train continues. Not one of them have earned this reward.
Score: 5 Votes (Like | Disagree)

826317
Can you really say that 1 person is important enough for a corporation that they deserve $22 million in bonus shares?
Score: 5 Votes (Like | Disagree)

The gravy train continues. Not one of them have earned this reward.

What are you talking about? They hit whatever goals they were given, your opinion is not a goal.
Score: 3 Votes (Like | Disagree)
Read All Comments