Apple's new sixth-generation iPad is available in Apple retail stores starting today, which means customers who are aiming to get one of the new tablets can check stock and arrange for an in-store pickup using Apple's online tools.

A stock check using the in-store pickup option suggests the new iPad is readily available at most Apple Stores in the United States, with plenty for walk-in customers who want to snag one of the affordable new tablets or check one out before purchasing. 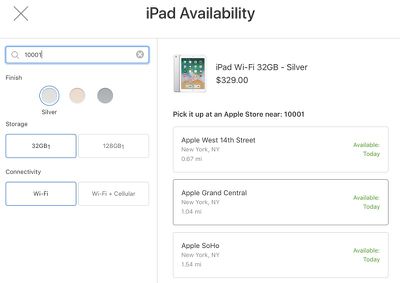 Priced starting at $329, the iPad comes in 32GB and 128GB configurations, with both WiFi only and WiFi + Cellular options available. It's available in Silver, Space Gray, and a new shade of Gold.

Apple first announced the iPad at an event in Chicago on Tuesday and began taking orders for the device on that day.

It also comes equipped with an upgraded A10 Fusion processor, so it's a good deal faster than the fifth-generation iPad. While it does have a Retina display, compared to the iPad Pro, it is lacking several advanced display options like ProMotion technology, True Tone, wide color support, and more.

Customers who purchased an iPad earlier this week should be seeing deliveries soon, as the tablets have been shipped out and are set to be delivered starting today.

2018 isn’t a relevant point depending on how factor the bezels. For some, The bezels serve their purpose Where it Allows you to adjust your grip when holding the iPad for longer periods of time without inadvertently touching the Display. Especially for the larger 12.9 iPad, the bezels are beneficial enough with hand fatigue because of the larger size.
Score: 16 Votes (Like | Disagree)

I can't grip my iPad with one hand wrapped around the back and sides like I can with my iPhone. I wind up pinching the bezels with my fingers to hold it. Without the bezels I would have inadvertent presses all the time.

The top and bottom bezels could be a tad smaller though. No reason they shouldn't be the same size all around the device.
Score: 12 Votes (Like | Disagree)

So put your thimb on the screen. It’s 2018. Let me gues you still miss the VHS tapes and floppy disks?

Never used floppy disks or VHS tapes. But I can tell you plenty others actually do prefer the bezels for reasons I mentioned with readjusting your grip with the iPad, and especially the 12.9 iPad when holding for longer periods of time Because of its unwieldy size with hand fatigue.
Score: 9 Votes (Like | Disagree)

2018 isn’t a relevant point depending on how factor the bezels. For some, The bezels serve their purpose Where it Allows you to adjust your grip when holding the iPad for longer periods of time without inadvertently touching the Display. Especially for the larger 12.9 iPad, the bezels are beneficial enough with hand fatigue because of the larger size.

I agree. I think the notion of an iPad without bezels is stupid. The device has a 9.7 inch display and weighs 1 lb. It can’t rest in you palm like a phone. You need to be able to grip the iPad. Unless you never plan on holding it, in which case, get a laptop.
Score: 9 Votes (Like | Disagree)

justperry
Those bezels though, it's 2018, get rid of them.
Score: 8 Votes (Like | Disagree)
Read All Comments