Logitech's G brand today announced the launch of a new gaming speaker, the G560. While primarily designed for gaming PCs, the G560 Gaming Speaker has unique features that may also be appealing to Mac users.

The G560, which features two light-up speakers and a subwoofer, is the first of Logitech's gaming speaker systems to come equipped with Logitech G Lightsync, designed to synchronize light and sounds to gameplay, movies, music, and more for a more immersive experience. 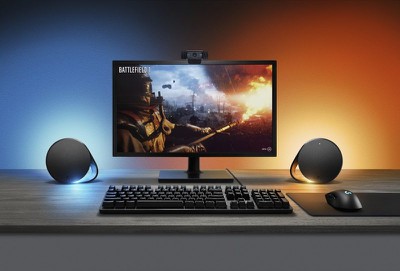 With Lightsync support, the lights built into the speaker can light up while you're playing games that have implemented the Lightsync API to add ambiance to gameplay. Many game developers have added support for Lightsync and have custom chosen the colors that will be displayed during various aspects of the gameplay. Supported games include Dota 2, Final Fantasy XIV, Fortnite, Grand Theft Auto V, and more.

Developer-supported Lightsync options are mainly for PCs, but Lightsync also works based solely on the colors on your display. Using the screen sampling tool in Logitech's Gaming Software for Mac, you can tie the lights to four different zones of your Mac's display, so while you're playing a game or watching a movie, the G560 lights will light up with colors that are linked to whatever colors are in the media you're using.

If you're watching a colorful movie, for example, the colors of the movie will be reflected through the G560's lights, and the same is true for when you're playing a game. If you're playing music, you can also set the lights to change in time with the beat of the music, and colors can be customized using Logitech's app. The lights support 16.8 million colors and several animation effects, and sound can be customized using a detailed equalizer tool.

According to Logitech, the G560 offers "amazing sound" with 240 Watts Peak/120 Watts RMS power, making it suitable for all kinds of media on PC and Mac. On PCs, it also includes DTS:X Ultra 1.0 support for precise positional audio.

Along with these features, the G560 supports Logitech's Easy-Switch technology, which allows you to connect several devices to the speaker at once and then switch between them. You can connect one USB device, one device through the 3.5mm input, and two Bluetooth devices at the same time. So, for example, you could connect your Mac, your iPhone, and your iPad to the speakers and then easily swap between them, allowing you to use the G560 with all of your devices.

Logitech's new G560 Gaming Speaker will be available for purchase from retailers around the world starting in April of 2018. It will be priced at $199.99, and it will be sold alongside the new $150 G513 Mechanical Gaming Keyboard, which also supports Lightsync.

twistedpixel8
I have lost faith in Logitech. Their hardware is still top-notch but their decision to outsource the software components to a truly awful developer in India is showing. The first hint was with the Circle 2 camera. Fundamental software engineering errors were made that a competent team would never have made. I can’t see this device being any different.

Very cool, but until they go back to in-house software, I’m not giving them any more money.
Score: 3 Votes (Like | Disagree)

oldmantick
Who remembers Philips AMBX system?
That one had lights and FANS that blew in your face.
The original Far Cry had AMBX support and a few other games, and then it went away
Score: 1 Votes (Like | Disagree)

I have lost faith in Logitech. Their hardware is still top-notch but their decision to outsource the software components to a truly awful developer in India is showing. The first hint was with the Circle 2 camera. Fundamental software engineering errors were made that a competent team would never have made. I can’t see this device being any different.

Very cool, but until they go back to in-house software, I’m not giving them any more money.

Is this why Logitech G software hasn’t been updated since October?
Score: 1 Votes (Like | Disagree)
Read All Comments

Wednesday July 8, 2020 9:35 am PDT by Joe Rossignol
Despite multiple reports indicating that Apple will not include EarPods or a wall charger with iPhone 12 models this year, one analyst believes that pricing will still increase slightly compared to the iPhone 11 lineup. In a research note provided to MacRumors, analyst Jeff Pu forecasted that iPhone 12 pricing will start at $749 for a new 5.4-inch model, an increase of $50 over the base...
Read Full Article • 230 comments