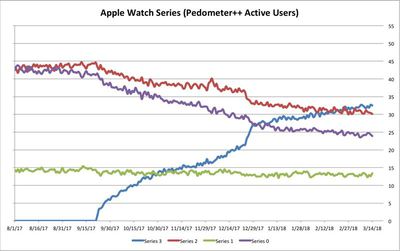 According to Smith, he's been keeping a close eye on Apple Watch Series 0 usage rates because he's hoping that Apple will soon drop support for the original Apple Watch, which he describes as a "bit painful" to develop for.

It is just slow and honestly a bit painful to develop for. Even basic things like deploying your application to the watch can take uncomfortably long amounts of time. In daily use the Series 0 is probably "good enough" for many customers, especially with the speed/stability improvements added in watchOS 4, but as a developer I can't wait until I no longer have to support it.

By contrast, Smith says the new Apple Watch Series 3 is "a delight to work with" because it's fast, capable, and has LTE functionality that allows for new kinds applications. Smith is hoping watchOS 5 will drop support for the original Apple Watch, which is why he tracks falling Series 0 usage rates, but he does admit that the device is still adequate for many users who just need basic functionality.

When watchOS 5 launches, presumably this September, the original Apple Watch will be more than three years old, and Smith believes, that based on current trends, Series 0 usage could be as low as 15 to 20 percent in his Pedometer++ app, which presumably is reflective of overall usage rates.

Apple ended support for the first-generation iPad, released in 2010, with the launch of iOS 6 in 2013.

Apple clearly has a history of ending support for first-generation devices after a few years, but it's not yet clear if the company will do the same for the original Apple Watch. Some of the original Apple Watch models, which were offered in 18-Karat gold, were priced at up to $17,000, so Apple could have unhappy customers when support for the device eventually ends.

For more of Smith's Apple Watch adoption analysis, make sure to check out his full blog post.

gplusplus
PedoMeter is such an unfortunate name.
Score: 13 Votes (Like | Disagree)

nwcs
The lesson on the rose gold watch S0 is to never spend that much on a fashion statement that's also an electronic consumable unless you're prepared to take the big hit.
Score: 5 Votes (Like | Disagree)

Some of the original Apple Watch models, which were offered in 18-Karat gold, were priced at up to $17,000 ('https://www.macrumors.com/2015/03/09/apple-watch-edition-pricing-10000/'), so Apple could have unhappy customers when support for the device eventually ends.

Which was why it was always stupid for Apple to originally push the device as a fashion statement. Everyone knew that its hardware would be left behind making its software unbearable and thus turning it into an expensive paperweight.
Score: 5 Votes (Like | Disagree)

Darmok N Jalad
Still on Series 0, which works okay for my modest needs. It is slow to start a work out, especially since OS4, but I just load that app and then change clothes. It's usually ready to go after that!
Score: 5 Votes (Like | Disagree)

How much actual gold is in that $17k watch? I'm sure it has a reasonable scrap value.

Frankly if you spend $17k on an Apple Watch you probably don't care about the value anyway.

I've always felt that Apple should have offered to upgrade the original gold Edition models. Basically just keep the case and replace the ceramic back, upgrade to S3 processor and replace the screen. This would be the the smartwatch equivalent of servicing a mechanical watch. If Apple charged around $500-$700, Edition owners wouldn't blink at the price, since some brand's mechanical servicing can run much higher. I don't think this would be feasible for the steel and sport models.
Score: 3 Votes (Like | Disagree)

aren't the CPU and RAM in series 1-3 the same other than waterproofing and LTE? when referring to the "original" apple watch, I'm assuming they mean the series 0 ones that had a single core CPU...

Not really sure what the difference between the S1P and S2 are - both advertised as dual core and S1P looked pretty much identical to S2 in day-to-day performance.

But there are big differences between the S1P/S2 and S3.
Score: 3 Votes (Like | Disagree)
Read All Comments