AliveCor, the company that makes an FDA-approved EKG band for the Apple Watch called KardiaBand, teamed up with the Mayo Clinic for a new study that suggests an AliveCor EKG device paired with artificial intelligence technology can non-invasively detect high levels of potassium in the blood. 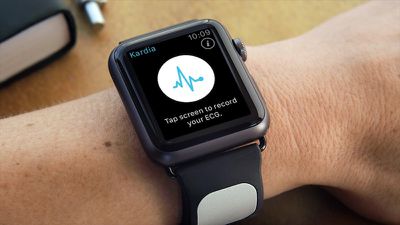 AliveCor's KardiaBand
For the potassium study, AliveCor used more than 2 million EKGs from the Mayo Clinic from 1994 to 2017 paired with four million serum potassium values and data from an AliveCor smartphone EKG device to create an algorithm that can successfully detect hyperkalemia, aka high potassium, with a sensitivity range between 91 and 94 percent.

High potassium in the blood is a sign of several concerning health conditions, like congestive heart failure, chronic kidney disease, and diabetes, and it can also be detected due to the medications used to treat these conditions. According to AliveCor, hyperkalemia is associated with "significant mortality and arrhythmic risk," but because it's typically asymptomatic, it often goes undetected.

Currently, the only way to test for high potassium levels is through a blood test, which AliveCor is aiming to change with the new non-invasive monitoring functionality.

AliveCor says that the AI technology used in the study could be commercialized through the KardiaBand for Apple Watch to allow patients to better monitor their health. Vic Gundotra, AliveCor CEO, said that the company is "on the path to change the way hyperkalemia can be detected" using products like the Apple Watch.

For the Cleveland Clinic study, cardiologists aimed to determine whether KardiaBand for Apple Watch could differentiate between atrial fibrillation and a normal heart rhythm. The researchers discovered that the KardiaBand was able to successfully detect Afib at an accuracy level comparable to physicians interpreting the same EKGs. The Kardia algorithm was able to correctly interpret atrial fibrillation with 93 percent sensitivity and 94 percent specificity. Sensitivity increased to 99 percent with a physician review of the KardiaBand recordings.

KardiaBand, which has been available since late last year, is available for purchase from AliveCor or from Amazon.com for $199. Using the KardiaBand also requires a subscription to the AliveCor premium service, priced at $99 per year.

"I found a number of restaurants that serve kelp..."
Score: 20 Votes (Like | Disagree)

You have to subscribe to use the hardware?? Screw that!

I just came off an A-fib incident. I spent 5 days in the hospital and the total hospital bill was $41,000. Thankfully, with Medicare, my portion was only $1200. Let's see...that would pay for 12 years of monitoring and possibly avoid a hospital stay, which is not a pleasant experience. You are poked and prodded every 4 - 6 hours, are served terrible food and are subject to care that can be interpreted in many different ways, not always good. A-fib has a high stroke risk.
A-fib, in many cases can be controlled, depending on the severity, with proper medication. I was fortunate enough to have a good cardiologist and was able to convert back to normal sinus rhythm with my meds. With advance knowledge, I would have been able to increase my meds earlier and would have avoided the whole 'health care' situation.
Those that have or can suffer from A-fib alone in the US, number over 2 Million. To many of us, this would be a small cost and to me, is a good return on investment.
Score: 13 Votes (Like | Disagree)

You have to subscribe to use the hardware?? Screw that!

Compared to one's health with issues like this, the yearly fee is pale in comparison.
Score: 12 Votes (Like | Disagree)

+1 for making me google the differences between an ECG and EKG.

They are the same thing.

It gets confusing but the serum potassium alogoritm is completely different from the atrial fibrillatin alogoritm. Both are based on the morphology (shape) of the ECG but they look at different aspects of the ECG.
https://www.ncbi.nlm.nih.gov/pmc/articles/PMC5652040/
Score: 8 Votes (Like | Disagree)

Apple_Robert
This is promising news. Seeing articles like this makes me glad that I purchased the Apple Watch, even if it can't currently do all that we would like right now.
Score: 8 Votes (Like | Disagree)
Read All Comments

Friday May 20, 2022 6:50 am PDT by Joe Rossignol
Earlier this week, The Information's Wayne Ma outlined struggles that Apple has faced during the development of its long-rumored AR/VR headset. Now, in a follow-up report, he has shared several additional details about the wearable device. Apple headset render created by Ian Zelbo based on The Information reporting For starters, one of the headset's marquee features is said to be lifelike...
Read Full Article • 124 comments