One of the minor disadvantages of buying an iPhone X early is having to wait for developers to update their apps with support for the smartphone's taller display. Many popular apps were updated within a few weeks after the device launched, but over four months later, there are still some notable omissions. 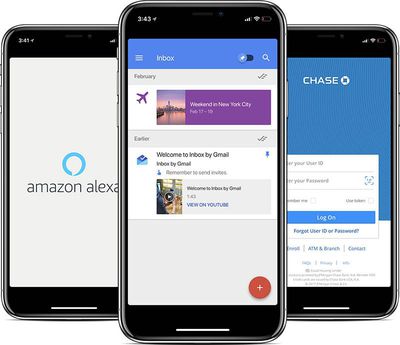 MacRumors recently asked our readers to share their favorite apps that have yet to be optimized for the iPhone X display. Then, we reached out to the developers of each app to ask them if and when they will release updates with iPhone X support. We've included comments from every company that responded below.

Apple did not respond to multiple requests for comment.

Google said it does not have anything to share at this time.

Microsoft confirmed it is working on updating its remaining apps to be optimized for the iPhone X, but it did not provide a timeframe.

Delgibbons
Bit shocking Apple still not updating some of their own apps to work with the notch :P
Score: 30 Votes (Like | Disagree)

ButteryScrollin
There are dozens of apps!

Cankoda
Baffles me that Apple can’t even make sure their own lineup of apps aren’t updated for the IPhone X. Really annoys me, some of them are app I use!
Score: 14 Votes (Like | Disagree)

This is an issue that Apple needs to address with developers. I have a secondary device that’s an android and the fragmentation from experience one device to another is a huge disadvantage of Android. Apple holding developers to the fire to comply with resolution and screen elements is what makes Apple a far better experience. Chase and other apps still not supporting the X display have been updated many times. Apple should require them to comple. Just my opinion.

They have to get their own house in order first before they can do that.
Score: 12 Votes (Like | Disagree)

Apple did not respond to multiple requests for comment.

First of all, great article.

As for the fate of most these 6 iOS apps by Apple, I think the short answer is: "they are dead, Jim."

iMovie probably is alive, but is given lower priority as the team focuses on Clips.

I think iTunes Connect is being reworked and will be renamed, perhaps unveiled during WWDC.

chriscrowlee
This is an issue that Apple needs to address with developers. I have a secondary device that’s an android and the fragmentation from experience one device to another is a huge disadvantage of Android. Apple holding developers to the fire to comply with resolution and screen elements is what makes Apple a far better experience. Chase and other apps still not supporting the X display have been updated many times. Apple should require them to comple. Just my opinion.
Score: 9 Votes (Like | Disagree)
Read All Comments