Apple has announced that skiers and snowboarders can use Apple Watch Series 3 to track their activities starting today. 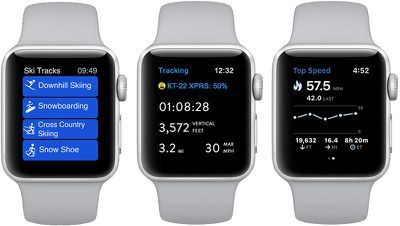 While not all of this information is available in the Activity or Workout apps at this time, some of the apps do have integrations. Ski Tracks, for example, features 17 different snow workouts that can earn credit towards Activity rings, while Snocru contributes active calorie measurements to the Activity app.

The ski and snowboard tracking is limited to Apple Watch Series 3 models, which are the only ones with a built-in altimeter to track elevation. TechCrunch's Katie Roof shared a closer look at some of the updated apps, which are now available on the App Store and require watchOS 4.2 or later.

Siri “good job falling down a mountain, shall I call ski patrol?”

"Here are some websites on ski poles."
Score: 18 Votes (Like | Disagree)

nfl46
This watch keeps getting better and better.
Score: 10 Votes (Like | Disagree)

And one more reason why I want this thing even though I really don't need it and would probably get bored of it after a while...:oops:

It’s not an entertainment device?

I find my Apple Watch (Series 0) gets most of its use from Apple Pay, complications like the weather/messages, notifications, telling the time (lol). It’s great for at a glance info, and for encouraging me to leave my phone in my room so it doesn’t distract me from my kids while still making sure I don’t miss important notifications (I have most notifications turned off).
Score: 9 Votes (Like | Disagree)

chiefsilverback
Nice update, just in time for the end of the season (on the east coast)!
Score: 6 Votes (Like | Disagree)

Series 3 only, because of the altimeter? Annoying. Altitude can be determined w/ GPS. Just a ploy to push upgrades? Booo.
Score: 5 Votes (Like | Disagree)

Detektiv-Pinky
Timely upgrade, now that winter is almost over in the northern hemisphere... :(
Score: 5 Votes (Like | Disagree)
Read All Comments