Apple's stock price has established a new all-time high in the company's history, as shares exchanged hands for slightly above the previous record of $180.10 in intraday trading today following several weeks of gains. 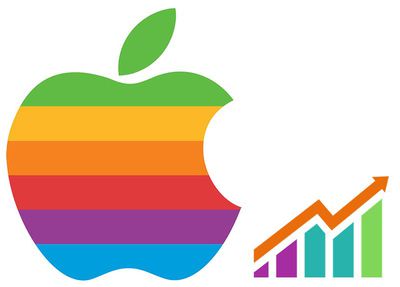 AAPL has been on the rise since bottoming out at $150.24 on February 9, one day after the Dow Jones plunged over 1,000 points. The broader selloff in the stock market proved to be short lived, as many technology stocks have since rebounded, and the Dow Jones is up nearly eight percent compared to a few weeks ago.

The all-time high comes after billionaire investor Warren Buffett said his company Berkshire Hathaway has purchased more shares of Apple than any other stock over the past year. Berkshire Hathaway increased its Apple holdings by 23.3 percent, to 165.3 million shares, according to recent filings with the SEC.

Apple shares have technically traded for higher prices, but today's all-time high accounts for multiple stock splits that have occurred over the years. Apple now has a market capitalization of well over $900 billion.

That strategy makes sense for someone who has held the stock short term, but for a long term holder it doesn't result in any tax savings. And long term you lose out on the appreciation of the stock you sold.

Either way the discussion is academic because Apple is highly unlikely to eliminate dividends. You'll see iOS on Samsung devices before that happens.

I'm not advocating Apple ELIMINATING the dividend. I just don't want them to substantially raise it or do a special dividend (something Cook already shot down).

Bubble. Warren is getting Senile. :apple:

Said no one ever. Buffett at 87 is incredibly sharp. I watched his entire 3 hour special on CNBC and he hasn't lost anything.

And Apple being a bubble? LOL!! I guess you forgot the entire market was crushed earlier this month and created massive market swings.

NFLX and AMZN are certainly closer to bubble territory at 200 and 350 times, respectively than AAPL at 15 times earnings.
[doublepost=1519746946][/doublepost]

I really want to sell and lock in what I've gotten on this, but I've only held it since August, so taxes will be about double on it what they'll be if I hold it another 5 months... the question I keep wondering is, will it manage to remain this high (or higher) for another 5 months? Or will it drop by enough that I should just swallow the taxes now?

I'm really overthinking it, given AAPL is only 3% of my portfolio, and I only have a single share of it. It's only the second share I ever bought, and will mark the first share I ever sold.

Just some friendly, free advice. Stop thinking about the price. You own a business. Will Apple be worth more or less in 5 years? Think about it this way. Markets can do anything. The same company traded at $150 just 3 weeks ago because markets overall became irrational. You can't make decisions based on what the stock price is doing.

You sell the Apple and then what? You buy something else and have similar worries.

My mentality is I own Apple, the business, not the stock. If something materially changes the business model, I will reevaluate my position. I was confidently buying shares when the market knocked AAPL from all time highs a few weeks ago because I know the facts and overall narrative have no changed, despite the change in share price.

You only sell when you believe the facts have change and the business is no longer headed for success. You don't sell because the quoted price reached a certain number.
Score: 10 Votes (Like | Disagree)

Baymowe335
The greatest investor of all time now holds almost 166M shares ($28B at current value) of the best company in the world. This is Berkshire's LARGEST marketable securities holding. Gives you a sense how much Buffett likes the business and Tim Cook (besides him saying it all the time).

By the way, this is old information as we knew Buffett added over 30M shares when the 13F was released almost 2 weeks ago. He owned over 130M shares for the last year.
Score: 10 Votes (Like | Disagree)

mtneer
The Board should look at raising dividends from May onward.
Score: 9 Votes (Like | Disagree)

The Board should look at raising dividends from May onward.

As a shareholder, I don't want dividends. I want them to buyback as much stock as they can and slowly raise the dividend, maybe 10% at a time. The stock is tremendously undervalued.

Berkshire shareholders recently voted on a dividend proposal. 47:1 it was voted "NO" to a dividend. Dividends are not always the best way to deploy capital. I certainly don't want to pay the tax.

Buybacks reduce share count, increase EPS, reduce dividend obligations, and avoid taxes. However, buybacks make sense at once price and don't make sense at another. I think Apple's buyback would make sense even at all time highs. Buffett agrees and he's said so.
Score: 6 Votes (Like | Disagree)

As a shareholder, I don't want dividends. I want them to buyback as much stock as they can and slowly raise the dividend, maybe 10% at a time. The stock is tremendously undervalued.

Berkshire shareholders recently voted on a dividend proposal. 47:1 it was voted "NO" to a dividend. Dividends are not always the best way to deploy capital. I certainly don't want to pay the tax.

As a shareholder since 1996 I want both. At this point if I was to sell any of my stock over 99% of the proceeds would be taxable as capital gain. Dividends allow actually using the stock appreciation without selling stock.
Score: 5 Votes (Like | Disagree)

Isn’t it wild that the value of Apple has swung by $100 billion within a month?

Every year like clockwork in December or January some negative Asian supply chain rumor on the iPhone comes out and Wall Street becomes a bunch of nervous nellies and dumps the stock. And then a month or two later get back into it. I don’t know of another company that has so much constant concern around it. The coverage on Apple is it’s always one bad quarter away from doom. I swear there’s nothing Apple could do that would make Wall Street not worried. If they had a blow out quarter in terms of iPhone sales then Wall Street would be fretting about it being a tough comp or that they’ll never be able to have another super cycle again. The stock is up now but as we get closer to the next earnings release I’m sure there will be more unsourced rumors about weak iPhone sales and it will get dumped again.
Score: 4 Votes (Like | Disagree)
Read All Comments