Apple this week has begun selling an updated version of Belkin's InvisiGlass Ultra screen protector for iPhone X on its website and at its retail stores, nearly two months after the original was recalled due to quality issues. 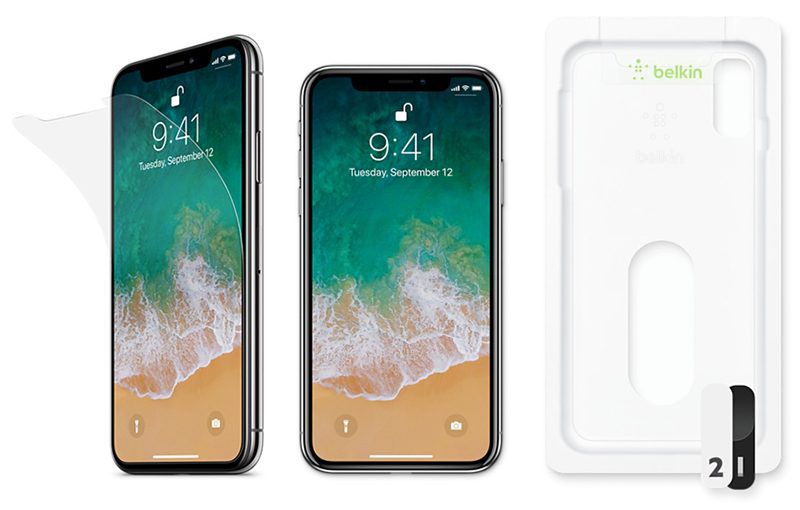 Belkin's product page states that the screen protector is now 0.29mm thick, compared to 0.21mm for the original InvisiGlass Ultra. As such, the new version will hopefully prove to be more durable, after dozens of customers complained about the first iteration cracking way too easily during normal day-to-day usage.

Belkin halted sales of the original InvisiGlass Ultra in late December due to a wave of negative feedback, including several one-star customer reviews. At the time, a company spokesperson told MacRumors that it considers "product quality and consumer feedback" to be of "paramount importance."

"We have been constantly testing this product since we released the first generation of it timed to iPhone X availability and things have evolved since you and I last spoke," a Belkin spokesperson informed MacRumors. "We identified some improvements to be made in the next generation of this product."

Apple and Belkin appear to have been providing refunds to customers who purchased the original InvisiGlass Ultra and found it to be defective, so we recommend contacting the companies if your screen protector easily cracked.

The new InvisiGlass Ultra remains $39.95 from Apple. The updated screen protector is still listed as "coming soon" on Belkin's website.

Yah, I don't understand the allure of screen protectors when the glass itself is already super-strong.


I was going to say something similar as you did. I don’t use screen protectors, and this is coming from somebody that also does not use cases where I don’t have to. I’m also cautious with my iPhones and I don’t put them in pockets with other items that could scratch it. And I have no scratches on any of my iPhones today, at least no scratches visible to My eye. I think screen protectors are great for added protection, but I personally do not think they are needed. I have always been pleased with the durability with Apples display and quality.
Rating: 3 Votes

Malcster
I have the original version on mine still, no issues so far.
Rating: 2 Votes

No thanks. I would never buy a glass-based screen protector. Only mylar/plastic/vinyl/etc. for me.

Maybe Apple could find a way to make a sandwiched screen material, similar to automotive glass...


Yah, I don't understand the allure of screen protectors when the glass itself is already super-strong.
Rating: 2 Votes

I thought the same thing, until my phone started getting many scratches by simply sitting in my jeans pocket. The phone is always in there by itself, so there was no reason to suspect there would be any reason for concern. Perhaps there were some gravel/sand particles on my pockets. After that happened I’ve always have a glass protector on. It seems like a good trade off for the protection it offers.


That definitely could be an issue where debris that you can’t see or feel inside your pocket can scratch the display. Sometimes it’s actually scratching the oleophobic coating and not the display itself. One thing I can recommend for those who do not use screen protectors or carry the phone inside their pocket, is turn your pocket inside out and use a lint roller which can attract any dirt or debris to help potentially avoid any issues.
Rating: 1 Votes

No thanks. I would never buy a glass-based screen protector. Only mylar/plastic/vinyl/etc. for me.

Maybe Apple could find a way to make a sandwiched screen material, similar to automotive glass...


Why not glass based? I am curious.
Rating: 1 Votes

No, I don't think so. At least not from my experience.

They have 2 versions with the black rim. It's not vinyl; it's just painted black under the glass. One version is case friendly and extends right up to the edge of the Apple leather case (to illustrate how far it goes), while another version covers even more of the display and is for those not using a case or using a case that doesn't curve around the display. And then they have a version without the black rim that is completely clear.

None of these block Face ID, and none have the rainbow effect (unless you improperly apply the one without the black rim). And I'm speaking from experience not from reading reviews (nothing wrong with that, but screen protector reviews are littered with people with differing expectations and ability to apply the protectors well without bubbles).


Thanks! Will check them out. I stand corrected.
Rating: 1 Votes

MrGimper
I'd be surprised if you could bend a glass screen protector in the fashion shown in the picture. Unless of course their solution was to now make it out of film rather than glass...
Rating: 1 Votes

MrGimper
My 8 plus is the first iPhone I've had where I've not used a screen protector. It's got a big scratch on the screen, BUT it's only visible with the screen off, at certain angles, and with a bright light shining on it. The screens DO scratch, just that the majority of the scratches are not visible under normal circumstances .... this may or may not bother you. This round I've just decided to get over it as the phone goes back to apple in 6 months anyway...
Rating: 1 Votes

Two fold: (1) the screen door effect is like looking at a something through a mesh of some sort. It's very subtle. If you can't imagine it perhaps Google it. (2) The screen protector by being anti-reflective will also act like a prism that some white light will be refracted so you might seem artifacts of a rainbow of colors especially when looking at a white background.
Rating: 1 Votes
[ Read All Comments ]