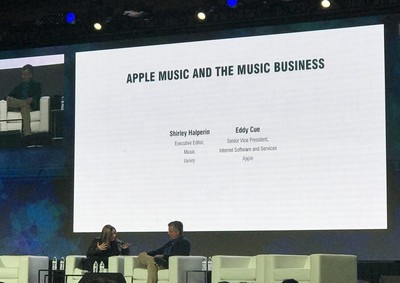 Image via Stacey Cohen White
Unsurprisingly, some of the discussion focused on the HomePod, which is officially launching this Friday. According to Cue, the HomePod will use its built-in A8 chip and AI algorithms to automatically adjust the bass, treble, and other settings on a song-by-song basis, so there won't be a need for users to fuss with settings.

In fact, Apple is confident enough in the HomePod's ability to make these adjustments that there are no built-in options to allow users to manually adjust sound.

Cue didn't want to share information about Apple's upcoming original programming plans, despite the fact that the company has inked deals for eight TV shows so far. He did, however, say that we may hear "a lot more" about Apple's plans in "a little bit of time," suggesting Apple will share details on its television goals later this year.

Details are light on the other points that Cue covered in his talk, but should more information surface on what he had to say, we'll update this post.

Eddy is a safe pair of hands at Apple. He's in control.

Psh. Cue needs to exit, badly. I feel like the services under his leadership have tanked in quality.
Score: 5 Votes (Like | Disagree)

Maybe - maybe not though. I’d love to watch some of the Netflix series shows but as many of the ones that seem interesting are riddled with profanity and unneeded nudity/sex I stay away from them. There is still a segment of the world who enjoy entertainment more when those things are not present. I for one appreciate Apples effort for “family friendly” content.
Score: 3 Votes (Like | Disagree)

It doesn't say anything about family friendly. It says he wanted to make black mirror, but what they bought was amazing stories, a known quantity. He didn't want to make the show he and spielberg sold to apple, and he has a long history of flaking out and leaving or getting kicked out of jobs.
Score: 3 Votes (Like | Disagree)

DocMultimedia
In other words, we'll tell you how much OUR streaming package will cost.
Score: 3 Votes (Like | Disagree)

Sunday May 9, 2021 2:00 am PDT by Sami Fathi
Zoom, a hallmark platform used by millions during the global health crisis, has been given access to a special iPadOS API that allows the app to use the iPad camera while the app is in use in Split View multitasking mode. This case of special treatment was first brought to attention by app developer Jeremy Provost, who, in a blog post, explains that Zoom uses a special API that allows the...
Read Full Article • 349 comments

Monday May 10, 2021 10:41 am PDT by Juli Clover
Apple's upcoming iPhone 13 models will be slightly thicker than the iPhone 12 models and will also feature larger, thicker camera bumps with lenses that protrude less, according to iPhone 13 schematics seen by MacRumors. The new iPhone 13 and 13 Pro models are expected to feature a thickness of 7.57mm, up from 7.4mm in the iPhone 12 models. That's an increase of 0.17mm, which won't be hugely ...
Read Full Article • 170 comments