HomePod Availability is Tightening Ahead of Friday's Launch

HomePod supply is beginning to dwindle ahead of the speaker's launch this Friday across the United States, United Kingdom, and Australia. 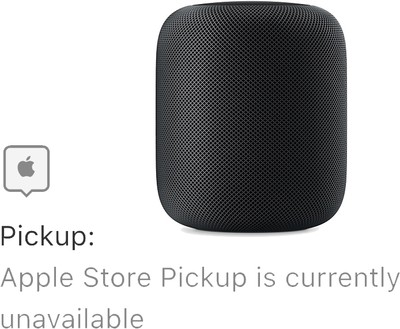 Apple Store pickup is now unavailable for the HomePod in all three countries, following several days of launch day availability, while delivery estimates for online orders of the speaker in Space Gray and White have been pushed back to February 12 in both Australia and the United Kingdom.

HomePod orders placed today on Apple's online store are still estimated for delivery on February 9 in the United States, when limited quantities of the speaker will be made available to walk-in customers at select Apple Stores and resellers, including Best Buy, John Lewis, Harvey Norman, Telstra, and EE.

Apple still lists most orders in the "Preparing for Shipment" stage, but that should soon change to "Shipped" as Friday draws closer. As noted in our forums, some customers have already been able to obtain a UPS tracking number.

HomePod sales will long be a subject of debate, as Apple's delivery estimates only serve as anecdotal evidence of exact supply and demand. We'll likely never know for certain, as the speaker will be grouped under "Other Products" in Apple's earnings results alongside products like the Apple TV and Apple Watch.

The embargo for HomePod reviews has just lifted this morning, with articles from The Verge, The Wall Street Journal, CNET, TechCrunch, iMore, and others. We'll have a more in depth roundup to share shortly.

If that's a review ... i had to stop halfway, because it's a nonsense.

Let me guess how it will go: only negative or less than positive reviews will be considered real reviews. Everything else will be discounted as the person being an Apple shill not wanting to lose their early access to Apple products.
Score: 6 Votes (Like | Disagree)

This for playing music...

Or more precisely, this is for playing Apple Music. ;)
Score: 3 Votes (Like | Disagree)

Or more precisely, this is for playing Apple Music. ;)

It has airplay, and soon airplay 2, so it will play anything, but yes, it seem to shock some, works best with Apple Music.
Score: 2 Votes (Like | Disagree)

Though, almost to a review, they praised the sound quality. And this is after using the HP in their own environments. I suppose Apple could have given them units with different speakers inside, but why, really?

The reviews just confirm what Apple has advertised, and what the demos demoed: That the HomePod produces excellent sound. They also confirm that Siri isn't better on the HomePod than it is on other Apple devices (but it isn't worse, so if you are satisfied with Siri that's not a negative). Finally, they point out that the HP only supports Apple Music as a built-in service, which is how Apple designed it. Nevada is not Vermont, so if you want Vermont, you probably won't like Nevada. But if you're looking for Nevada, there's no better one than Nevada. Pointing out that it isn't Vermont is only a negative to those who want it to be Vermont. I don't use Spotify, so I don't care if HomePod supports it.

I don’t get writing a review based on what you wanted something to be vs what it was designed to be. Apple pitched the HomePod as high quality speaker first, minimal smart assistant second and cross platform never. So yeah if you have an Android phone and Spotify account HomePod isn’t for you. Apple never said it would be. if you’re reviewing HomePod based on things Apple never promised you’re doing it wrong.
Score: 2 Votes (Like | Disagree)

A bunch of pre-release demo reviewers touted over and over recently because they were generally-to-very favorable on the product in their demo and "first look" (not-a-review) articles, are about to be bashed and marginalized for daring to now write down tangible cons in their official reviews.

So very right last week, yet likely to become so very wrong this week. What changed?

To be fair, the reviews I've read so far all praise the sound quality and most of the criticism is aimed at the limitations due to Siri and the walled garden, which realistically has been expected since the HomePod was announced.

If you are camped entirely in Apple's ecosystem it sounds like it could be a great addition to your home, if you use products and services from other companies then you will probably be better served going elsewhere.
Score: 2 Votes (Like | Disagree)
Read All Comments