Apple's HomePod pre-launch stock showed the first signs of dwindling supply on Monday. Customers in the U.K. placing new pre-orders on the company's regional online store can now expect deliveries of Apple's smart speaker to arrive no earlier than Tuesday, February 13, three days after the official launch day this Friday. 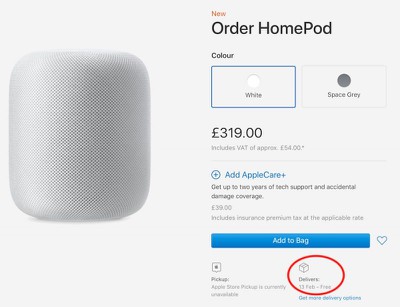 In the United States and Australia, where HomePod is also launching this week, shipping estimates for the smart speaker in both White and Space Gray colors are still listed as Friday, February 9.

Despite the slip in Apple's delivery date, U.K. residents can still get hold of a HomePod on launch day by pre-ordering online from authorized Apple resellers. At the time of writing, stock is listed as available at Argos, EE, and Currys PC World. John Lewis will also be accepting HomePod pre-orders from 8pm GMT on Wednesday, February 7.

Last week, Apple's first batch of pre-order customers began receiving notifications from their banks about being charged for their orders, with many located in the U.K. Apple began taking orders for the HomePod on January 26 in the United States ($349), U.K. (£319), and Australia ($499). Later this spring, the HomePod will also launch in France and Germany.

Why get two Sonos speakers when you can get 1 million tin cans and string for the same price?
Score: 25 Votes (Like | Disagree)

Just as I can get 3 android phones for the price of one iPhone.

You mean in the one hour, tightly controlled Apple demos with hand picked media? Yes, I'm sure those "hands on" reviews are totally reliable and not biased at all.

People who want to pick fault always say this BUT Apple is usually conservative when it comes to stuff like this, after all if they built it up to be something it wasn’t people would complain and they wouldn’t be trusted in future. The same was said about the AirPods, iPhone, iPad Apple Watch and so on and they are all amazing products, I have no reason to doubt Apple one bit here, BUT just in case remember EVERYONE that has ordered the HomePod or indeed any Apple product has 14 days to return if they don’t like it.
Score: 8 Votes (Like | Disagree)

but you can outfit your house with the real winner, which is the Echo.

meady100
Quite a lot isn't it?! Still I'm sure listening to Siri misunderstand me will never have sounded so good :-)
Score: 6 Votes (Like | Disagree)
Read All Comments

Sunday August 1, 2021 6:21 am PDT by Sami Fathi
Models of the Apple Watch Series 6 with titanium cases part of the "Apple Watch Edition" collection is currently widely unavailable for pick-up in several of Apple's retail stores in the United States and is unavailable entirely for delivery in major markets. Noted by Bloomberg's Mark Gurman in the latest edition of his "Power On" newsletter, titanium models of the Apple Watch Series 6,...
Read Full Article • 120 comments

Saturday July 31, 2021 12:13 am PDT by Tim Hardwick
Telegram Messenger has received a major update to its video capabilities, including support for video calls with up to 1,000 viewers. Group video calls in Telegram allow up to 30 users to stream video from both their camera and their screen, and now a maximum of 1,000 people can tune into the broadcast. Telegram says it intends to continue increasing this limit "until all humans on Earth...
Read Full Article • 54 comments

Saturday July 31, 2021 6:00 am PDT by MacRumors Staff
This week saw an interesting range of Apple news and rumors, including a blockbuster earnings report, rumors about next year's "iPhone 14" and Face ID coming to Macs, and more. Subscribe to the MacRumors YouTube channel for more videos. Other popular topics included Apple's crackdown on leaks, changes in the latest round of betas for iOS 15, iPadOS 15, and macOS Monterey, and several stories...
Read Full Article • 50 comments