A new Smart Tempo system is designed to keep multiple tracks in sync regardless of their original tempo, allowing content to be combined together automatically. It lets users record into Logic Pro X using an attached instrument sans metronome or click track, with the software analyzing your performance to create a tempo map for the project. 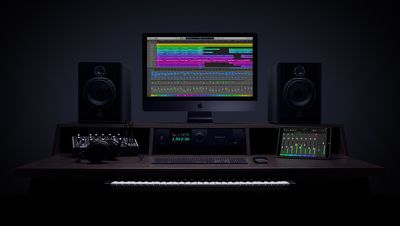 Several new plug-ins are included in Logic Pro X 10.4, including ChromaVerb, an algorithmic reverb with a colorful visual component, Step FX for rhythmic multi-effect processing, and Vintage EQ with three vintage analog EQ models from the 1950s to 1970s. A full list of all the new plug-ins is below:

Two additional drummers with roots and jazz-influenced styles are included, and there are two new vintage brush kits for Drum Kit Designer. Apple has also added more than 800 new loops in a variety of instruments and genres, plus the New Visions library for Alchemy has gained 150 cinematic presets.

Other new features include an undo option for mixer and plug-in actions, an option for saving favorites in the File Browser, support for looping audio files in the Loop Browser, and a new universal design for controlling articulations for a more consistent interface across Logic and third-party instruments.

Thanks for that! And the rest of the stuff. Especially curious about the Studio Strings and Studio Horns.
[doublepost=1516903940][/doublepost]

I think it's fine to ”cheat” (or whatever you want to call it) when recording and creating your song/project as long as the result is good. :) I still think you need to have skills to make good stuff, it's just that some obstacles are more easy to overcome with modern tools. And the possibilities are endless.
Score: 15 Votes (Like | Disagree)

Because the only skill really needed to create music is the ability to follow a metronome... ;)
Score: 12 Votes (Like | Disagree)

As my current roster of recorded music using Logic clearly proves, technology is not a substitute for talent. Probably never will be.
Score: 8 Votes (Like | Disagree)

Guessing you are not a musician who records and performs. Recording music is a wildly different skill than playing live music. Fact of the matter is, unless you only listen to recordings of live sets (and even then, most outside of jazz and classical will have overdubs), there has been some form of "studio magic" on literally every song you've ever liked. If you're that worried about the artist's musical pedigree and integrity, you have to see them perform live, and that has always been the case.
Score: 8 Votes (Like | Disagree)
Read All Comments