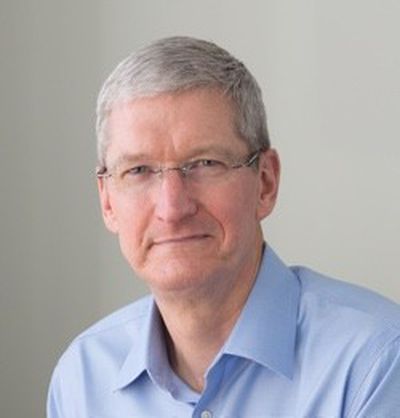 Apple's Tim Cook on Wednesday joined over 100 other CEOs in urging the U.S. Congress to pass a bill to protect young immigrants before the Deferred Action for Childhood Arrivals (DACA) program expires. For those unfamiliar with the program, DACA gives about 800,000 illegal immigrants who entered the U.S. at age 16 or younger work permits and protection from deportation by two-year deferral. Many of those protected by DACA have been in the United States for most of their lives.

In an open letter to House and Senate leaders, the group called on lawmakers to introduce legislation supporting so-called Dreamers by Friday, which is the deadline for Congress to pass a bill for government funding to avert a shutdown. The DACA program actually expires on March 5, but the CEO signatories say the government needs time to implement a new program before that deadline.

"We write to urge Congress to act immediately and pass a permanent bipartisan legislative solution to enable Dreamers who are currently living, working, and contributing to our communities to continue doing so," the letter reads. "The imminent termination of the DACA program is creating an impending crisis for workforces across the country."

Facebook's Mark Zuckerberg, Microsoft president Brad Smith, Amazon’s Jeff Bezos, and Verizon CEO Lowell McAdam were additional signatories of the letter, which cited a CATO Institute study that found ending the DACA program could cause a $215 billion decline in the gross domestic product.

"In addition to causing a tremendous upheaval in the lives of DACA employees, failure to act in time will lead to businesses losing valuable talent, cause disruptions in the workforce, and will result in significant costs," the group wrote. "While delay or inaction will cause significant negative impact to businesses, hundreds of thousands of deserving young people across the country are counting on you to work in a bipartisan way to pass permanent legislative protection for Dreamers without further delay."

Tim Cook has been consistent in his support for a legislative solution to protect those affected by the end of the DACA program. Following U.S. President Donald Trump's September announcement that DACA would be phased out over six months, Cook sent an email to employees saying Apple would try to help Congress find a solution and would be working with impacted Apple employees to provide support, including access to immigration experts. Apple employs 250 "Dreamers", Cook previously revealed in a tweet.

In December, Cook teamed up with Koch Industries CEO Charles Koch to write an opinion piece in The Washington Post about DACA, asking Congress to work quickly to come up with a solution before the end of the year. That never happened, and the government's stance on the issue now appears to be mired in confusion.

On Tuesday, a federal judge in California issued a nationwide injunction ordering the Trump administration to maintain the DACA program on a nationwide basis while legal challenges to the president's decision go forward.

In another development this week, concerns grew among hardliners after Trump met with lawmakers during a freewheeling televised session, in which he signaled he was open to compromise and seemed to express support for a number of legislative options to legalize Dreamers.

Indeed, the president appeared to suggest that the details of a legislative solution didn't matter to him, telling congressional leaders that he would approve whatever they sent him. "I will be signing it," Trump said towards the end of the meeting. "I'm not going to say, 'Oh, gee, I want this or I want that.' I'll be signing it."

s2mikey
Of course they support them - thats because they dont actually have to "support" them aka free stuff since Tim and the rich posse arent affected by draconian taxes that have to pay for these people and their free ride. Gimme a break. :rolleyes:
Score: 86 Votes (Like | Disagree)

827538
So happy to speak up on left wing virtue signalling issues yet where was his support of net neutrality?

How about supporting the American people first Tim? Especially on something far more in tune with what your company actually does.

Illegal immigration is a crime and one that causes real damage.
Score: 65 Votes (Like | Disagree)

And it's fun for the controllers to bash the law-abiding while causing chaos through the lawless. ***** and giggles for the 1% of the 1%.
Score: 51 Votes (Like | Disagree)

Aluminum213
And we the people urge the richest company in the world to actually pay its taxes
Score: 51 Votes (Like | Disagree)

Of course they support them - thats because they dont actually have to "support" them aka free stuff since Tim and the rich posse arent affected by draconian taxes that have to pay for these people and their free ride. Gimme a break. [emoji57]

Immigrants eligible for DACA pay over $2 billion a year in taxes but, hey, I guess you would rather just spread more unsubstantiated lies about them to make a cheap point instead, right?

And what has illegal immigration has to do with the topic at all....

We are not talking of the atlantic slave trade here...now, that did some damage, and not to america...these are paid individual who pay taxes, rent, foods and so on.

Are you kidding? Dreamers have parents who came here, prepare yourself, illegally.
Score: 31 Votes (Like | Disagree)
Read All Comments

Saturday February 4, 2023 1:30 am PST by Hartley Charlton
Google's Chromium developers are working on an experimental web browser for iOS that would break Apple's browser engine restrictions, The Register reports. The experimental browser, which is being actively pursued by developers, uses Google's Blink engine. Yet if Google attempted to release it on the App Store, it would not pass Apple's App Review process. Apple's App Store rules dictate...
Read Full Article • 201 comments