After introducing a HomeKit controller in the shape of a dodecahedron, Nanoleaf recently announced the next generation of its popular triangle-shaped Nanoleaf Light Panels. The new panels don't have a name or a price yet, but the company revealed that they are square and include a few feature additions and improvements from the previous generation (via CNET).

Each square panel will include a touch sensitive surface, so you can turn them on or off, dim or increase their brightness, or change to another color preset just by tapping or sliding your finger on them. The base station for the square panels is also said to come with a microphone and motion sensor that can detect motion and alter the lighting flow of the panels as you walk by, for example. 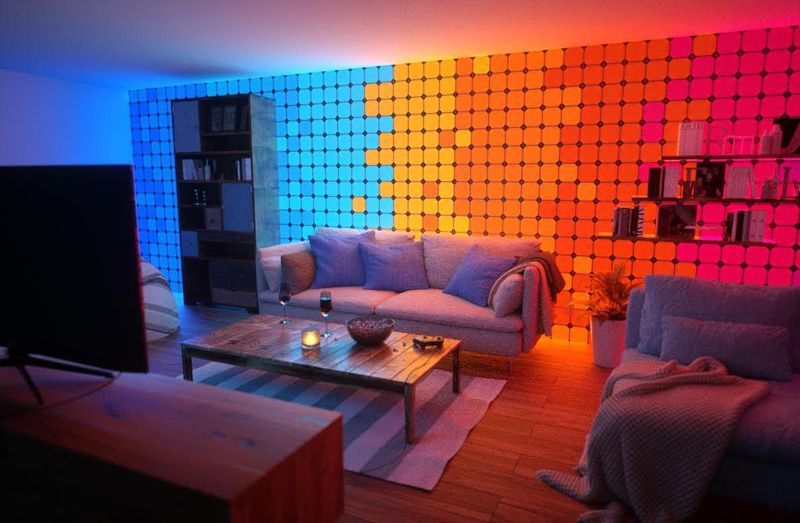 Nanoleaf has also greatly increased the maximum limit of panels you can connect together. Instead of 30 panels able to connect to one base station (the limit on the triangular panels), up to 1,000 square panels can be outfitted together at once. Still, for every 60 panels strung together you will need a power booster -- set to be sold by Nanoleaf -- in order to "maintain optimal brightness."

Nanoleaf said that it plans to keep the new square panels "as affordable as possible," but the company isn't confirming a price range at CES. The new panels are expected to launch at some point later in 2018. An expensive proposition for most, but completely within the realm of possibility for most wealthy individuals.


FYI got this official Disney Flynn shirt a few years ago at the premier showing of Tron 2. The really cool thing is the neon glow in the dark "Flynn" affect. It's 'charged' by sunlight, or incandescent light (very slowly on the latter) and when it's very dark glows. What's really odd is I can't take a picture of it directly or indirectly via a mirror!!

Will you write your own app and self-sign it to control them as well?


Hell no ... I just want to light up the wall. If there is a chipset that will link the panels that comes "connected" to HomeKit then I'd like to find out the cost of sourcing parts and where. If feasible I may give it a try.
Rating: 1 Votes

jmgregory1
They need some significant commercial customers to buy into using these panels in order to help drive costs down, if they ever expect to sell to consumers (in any kind of volume).
Rating: 1 Votes

These are cool, but I think this company needs to go beyond the cool factor and get practical (and hopefully help lower their price-point). Has Nanoleaf ever discussed the possibility of ceiling mounting their panels? Not having seen one in person to the panels pump out enough lumens to be used as home lighting?

Yes, they’re ceiling mountable. In fact, with their flexible connect strips and screw mounting plate, you can have lights go up the wall and continue seamlessly to the ceiling. Of course, this will require screw holes in your ceiling, which is why most folks put them on the wall with contact strips.
Rating: 1 Votes

H3LL5P4WN
If I ever hit the lottery, I'll be all over this, lol.
Rating: 1 Votes

Labeno
Wow, everything is starting to have a microphone these days. Most companies have learned to weaponize capitalism, you need customer data. What better way than microphones.
Rating: 1 Votes
[ Read All Comments ]