Camera and drone maker DJI today announced two new camera stabilizers ahead of the first official day of CES 2018, which begins tomorrow, January 9. DJI's reveal centered upon the Osmo Mobile 2 and Ronin-S, a pair of stabilizers made for smartphones and DSLRs, respectively, that allow users to take videos without having to worry about shaky cam disrupting the footage.

The Osmo Mobile 2 is the newest model in DJI's line of camera stabilizers for smartphones, introducing simpler controls with cinematic zoom and a longer battery life. Like the previous device, the Osmo Mobile 2 is compatible with iPhone and includes three-axis gimbal technology to cancel out movement in three directions, allowing footage to remain steady even when the user's hands shake. 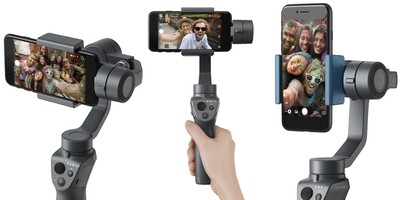 The gimbal technology combines with DJI's SmoothTrack technology to detect and compensate for the user's movement of the camera and "ensure a smooth cinematic shot every time." Users can shoot in both landscape and portrait orientation, and a 1/4" universal screw mount makes the Osmo Mobile 2 compatible with most photography accessories.

"With the introduction of these two stabilizers, DJI now offers gimbal technology to help unlock the creative storyteller in everyone no matter what camera they're using," said Paul Pan, Senior Product Manager at DJI. "Osmo Mobile 2 offers the best in smartphone stabilization at an affordable price, and Ronin-S brings the quality of DJI's professional gimbal technology to a new form factor that is perfect for run-and-gun filming using your favorite DSLR or mirrorless camera system."

In terms of the major new additions, DJI said the new device's battery system is "more powerful" than its predecessor and allows for filming for up to 15 hours, which is three times longer than the original. There's also a new USB port to enable smartphone charging while the Osmo Mobile 2 is being used, and even lets the Osmo act as a power bank for charging other devices when not in use.

DJI said the "simpler controls" include ways for users to use their smartphone's camera similar to a professional camera, thanks to integrated settings for ISO, shutter speed, and more. A new button for a zoom slider on the Osmo Mobile 2's handle lets users operate their smartphone camera without needing to touch the screen, and the controls also allow for the production of a dolly zoom, which DJI said is "a visual effect usually created only on professional film sets."

The Osmo Mobile 2 will cost $209 AUD (about $163 USD) and will launch exclusively on Apple.com, with pre-orders beginning January 23. In early February, the new Osmo will then debut on DJI's own website, as well as in DJI stores and authorized resellers. Later in February the device will be available to purchase in Apple's retail stores too. The Ronin-S will launch in Q2 2018.

Resseh
I wonder if the Mobile 2 will work with the iPhone X's own stabilisation this time
Score: 5 Votes (Like | Disagree)

...Even worse it’s cheaper than the old one, unfair to original purchasers.

They had no competition then; other Chinese manufacturers like Zhiyun are nipping at their heels now, undercutting them on price, and starting to match on features and software. Paying more is the price of being an early adopter. You won’t hear the rest of us who don’t have one and considering the Zhiyun based on price, complaining.
Score: 3 Votes (Like | Disagree)

TwoBytes
DJI didn't admit the jitter issue in the Osmo 1 which effects OIS phones...or maybe likely didn't want to fix it as the 2 was on the cards. I wonder if they fixed this.
Score: 2 Votes (Like | Disagree)

belvdr
After DJI's latest security issue (and their handling of it), I just cannot get back into them.
Score: 1 Votes (Like | Disagree)

They had no competition then; other Chinese manufacturers like Zhiyun are nipping at their heels now, undercutting them on price, ...

That's exactly it. I think DJI saw that shortly after the Osmo 1 release and realized that there was little to be gained from spending a lot time and effort supporting and perfecting the (very expensive) Osmo 1. Instead they realized the gimbal product needed to be cheap to compete. People simply weren't going to pay the normal DJI premium for a gimbal product. So, they let the Osmo 1 languish (ignoring all the complaints on their forums) and moved to create a cheaper Osmo 2. And, here we are.
Score: 1 Votes (Like | Disagree)

Has anyone heard an update on whether this will be available tomorrow ? and maybe even a time ?

I've been looking for info on tomorrow's Apple-exclusive pre-order as well. My local Apple Store has not heard anything about it and I haven't found any info online either. Let's post info here once we learn something. I'm trying to get one in time for a project I'm working on in March.
Score: 1 Votes (Like | Disagree)
Read All Comments

Saturday May 30, 2020 4:00 pm PDT by Eric Slivka
Apple today doubled the price for upgrading the RAM on the entry-level 13-inch MacBook Pro, with customers in the United States now being charged $200 to move from 8GB to 16GB compared to the previous $100 upgrade price. Similar increases are seen in other countries, such as moving from €125 to €250 in Germany and from £100 to £200 in the United Kingdom. Current pricing on RAM upgrade for ...
Read Full Article • 315 comments

Tuesday June 2, 2020 1:31 am PDT by Tim Hardwick
Apple Music has cancelled its Beats 1 radio schedule for Blackout Tuesday and is suggesting that listeners tune in to a radio stream celebrating the best in black music. Blackout Tuesday is a campaign organized by the music industry to support Black Lives Matter after Minneapolis citizen George Floyd was killed by police in the course of his arrest. On launching Apple Music, many users...
Read Full Article • 405 comments