Canalys Predicts 2018 Will Be 'Defining Year' for Smart Speaker Growth

A new report posted today by Canalys predicts that 2018 will be "the defining year" for smart speaker adoption, with the global market expected to grow to 56.3 million shipments by the end of the year, up from just over 30 million in 2017 (via TechCrunch).

Canalys predicts that Amazon and Google will remain in the lead with Echo and Home speakers, respectively. In addition to existing products, Apple's HomePod will be one of multiple new entries in the market to help smart speaker consumer adoption grow this year. 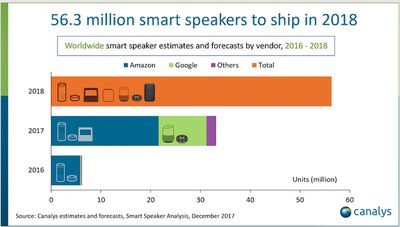 Canalys research analyst Lucio Chen said that smart speaker uptake has "grown faster than any other consumer technology" the group has recently encountered, including augmented reality, virtual reality, and wearables.

The possibilities to do this are endless, be it discreet advertising, content subscription bundles, premium services or enterprise solutions. The technology is still in transition, and increased investments from multiple players of the ecosystem will fuel growth.”

On a country-by-country basis, the United States is believed to remain "the single most important market" for smart speakers in 2018, with shipments predicted to reach 38.4 million units. China is then marked as a distant second place with 4.4 million units. Looking further into the future, Canalys mentioned that the U.S. will hold its top spot in the global smart speaker market through 2020.

Canalys wrote that smart speaker adoption has accelerated on a global scale due to "successful upgrades" to existing products, and potential for smart home integration.

“Vendors have begun offering successful upgrades to their latest models, and a key element driving this stickiness are the smart home partnerships. Alexa’s multiple smart home integrations, Google’s partnership with Nest and Apple’s HomeKit initiatives will continue to excite consumers of the smart speaker and fuel sales in 2018.”

The HomePod will be Apple's entry into the smart speaker market, allowing users to use voice commands to control HomeKit devices, play Apple Music, ask Siri questions, and more. The device was previously set to launch in December 2017, but in November Apple decided to delay the speaker's debut to early 2018. Since that delay we haven't heard any mention of when the HomePod might launch, but the company's definition of "early" is generally January through April.

Moi Ici
I could never have a “live” speaker in my home. The security issues just bother me.
Score: 16 Votes (Like | Disagree)

wwchris
Sorry if this is rambling, but the topic is so large it is impossible to address in a post. It really needs a full article somewhere.

I hate to say it, but I believe this is going to net out in the pretty near future as Apple's biggest blunder.

This market is already huge and Apple is too late to the game with the wrong product. I already own 8 Echo devices and 3 google Home devices and I am so deep into the Apple ecosystem it is ridiculous. I gave out Echo dots as Christmas presents to everyone in my family. At $29 they were so cheap it was a simple go to gift that everyone wanted and was excited about. Anyone I know that is even slightly tech savvy already has an Echo or a Home device. Echo devices are Amazon's biggest sellers out of all products they sell.

Home automation is going to be an enormous market in the next few years and unfortunately, Siri is awful, Homekit is awful, Homekit doesn't have enough device support (but virtually all devices work with Echo and Home) and Homepod is too expensive. If I'm an audio aficionado, I already own a stereo, why don't I just play my music through that via an Echo dot (for example)? If I'm not an audio aficionado, why would I spend $349 on a speaker?

Apple has no internal infrastructure to handle many of the tasks required to make Homepod more than a music player. Am I going to have to ask Siri to search Google for answers like I have to do on my phone if I want any reliable search results?

Apple should have been focused on creating a line of their own connected hardware under the apple brand and kept it within their ecosystem and rolled it out over the last few years. Apple branded smart locks, security cams, lighting and outlets that set up as easily as Airpods would have been a game changer and they could have charged a massive premium. (There is still time for that if they somehow have this secretly in the works, but that window will be closing very soon). How did they not build an AppleTV with a small speaker and voice recognition built in?

Ugh, this post lacks coherency, but suffice it to say, I think apple has lost their way in many areas (the recent battery thing and what I now consider to be bottom of class customer service when it come to phone and iPad repairs for example) and for the first time in 10 years, I am seriously considering dipping my toes into other ecosystems beyond just educating myself.
Score: 10 Votes (Like | Disagree)

I could never have a “live” speaker in my home. The security issues just bother me.

It's kind of like 1984, except that people are willing doing it to themselves. A device that is constantly listening; what could possibly go wrong?

There's already been at least one case where police tried to use a smart speaker in their investigation, and the government can still issue FISA warrants to grab data they want with essentially no real judicial oversight. Apple admits they receive and sometimes comply with "requests" for individuals' data and have offered to help in certain cases.

Some will say this is conspiracy thinking, but no one can dispute the facts. You can interpret them how you like, but I will not be putting a smart speaker in my home.
Score: 7 Votes (Like | Disagree)

I don’t think Siri can ever be as good as the google assistant.

As someone as myself who uses Siri on a regular basis, I agree that Google assistant is much better in dictation and producing accurate results. The speed of Google assistant also produces results faster. Siri has its moments when it works efficiently and other times it can be frustrating, but Google Assistant has improved significantly where Siri struggles at times.
Score: 6 Votes (Like | Disagree)

D.T.
Well, that's better than saying, "2018 will be the defining year for giant monster attacks".

tallscot
We bought a few Amazon Echo Dots at $40 and use them as an intercom system to tell my kids it's time to eat dinner, etc. We use the one in the kitchen for a timer as we cook, and to check the weather. The ones in the bedrooms are used as alarm clocks for the kids too.

My family room AV receiver is Bluetooth so I connected the Echo Dot in the kitchen to that receiver to play my Amazon Prime membership songs over the stereo. No need to fire up the Apple TV anymore.

At some point, I'll start buying the lights and a smart thermostat.

I'm not really sure what Apple's waiting for.
Score: 5 Votes (Like | Disagree)
Read All Comments