Amazon's long-awaited Prime Video app for Apple TV had the most first-week downloads of any app in the history of the tvOS App Store. 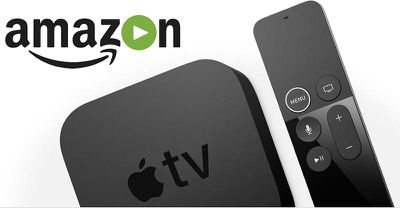 "Prime Video has been a hit with Apple TV customers around the world — it had the most first-week downloads of any app in the history of tvOS," an Amazon spokesperson reportedly told BestAppleTV.com.

Amazon and Apple haven't disclosed any actual download numbers, nor do we know the previous record or the app that achieved it. The tvOS App Store launched alongside the release of the fourth-generation Apple TV in October 2015, and thousands of apps are now available to download on the platform.

Similar to the Prime Video app on other platforms, the Apple TV version enables Amazon Prime subscribers to watch Amazon Prime exclusive TV series, and a collection of movies, including some titles in 4K HDR. Prime Video for tvOS supports both the Apple TV's universal search functionality and Apple's TV app.

Amazon achieved this accomplishment despite some criticism about the Prime Video app having a poorly designed interface. Apple reporters John Gruber and Rene Ritchie, for example, have both said Prime Video is the worst tvOS app they've ever seen, echoing a sentiment shared by some users on Twitter.

Nevertheless, given Prime Video is a popular service and was already available on so many other platforms, many Apple TV owners are likely happy that at least some kind of app is finally available on tvOS.

BestAppleTV.com is run by Brad Gibson, who has previously worked for Apple-related publications such as MacUser, MacFormat, MacNN, The Mac Observer, MacCentral, and Macworld, some of which have shut down. We haven't confirmed the accuracy of Amazon's statement with Apple or Amazon.

Update: Gary Ng at iPhone in Canada informed us he received the same statement from Amazon, confirming its authenticity. We've also learned the statement originates from Apple, despite being distributed by a PR agency working with Amazon.

cambookpro
It's a really lazy port, and it's really not great to use compared to the vast majority of tvOS apps, but it has meant I could bin my awful Fire Stick to watch The Grand Tour - so I won't complain too much...
Score: 7 Votes (Like | Disagree)

asdavis10
Doesn't surprise me. Amazon essentially let the pool of Apple TV customers build to such a large size. I downloaded it on both of my boxes and know many people who did the same. Amazon Prime Video is a pretty good service considering I have it because I mostly care about Prime shipping.
Score: 6 Votes (Like | Disagree)

How these guys singled out Amazon Prime, I have no idea.

There are a LOT of very poorly designed apps on ATV. Many of them will start autoplaying video you didn't ask for (Netflix, Cartoon Network, MTV). What a garbage design decision, and no way to turn it off. Apple let us block autoplay from Safari, how about ATV apps?

And the menu structures on a lot of them are fiddly and counterintuitive. The Hulu app in particular is a dumpster fire. All we need is a basic hierarchal menu, and somehow they screw that up. All I'll say is, thank god for Siri search, because sometimes it's just about the only thing that tames the interface ****-show in a lot of these apps.

And I'm not even going to get into the fact that so very many of them keep needing to be reauthenticated over and over if your cable provider isn't fully supported by single sign-in.

I keep using ATV because I have Macs and iOS devices and it connects well with those things, but I have to say, it's just gotten crappier and crappier over time.

What makes this even worse is that app makers actually have to go OUT OF THEIR WAY to develop these bad interfaces. The Apple TV SDK provides a smooth, easy to use browsing interface for content right out of the box, but they still insist on rolling their own slower and inferior interface.
Score: 6 Votes (Like | Disagree)
Read All Comments