Apple has retaken the lead in the global wearable band market thanks to strong Apple Watch shipments in the third quarter of this year, according to new research data from Canalys. According to the data, Apple shipped 3.9 million units in Q3 2017, compared to 2.8 million the year previous.

Those figures gave the tech giant 23 percent of the market, placing it marginally ahead of the 21 percent recorded for Xiaomi, which briefly held the number 1 spot for the first time the previous quarter. Canalys estimates that the new Apple Watch Series 3 LTE accounted for only 800,000 shipments because of constrained supplies. 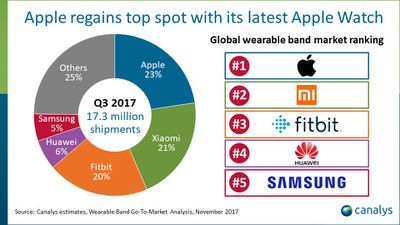 "Strong demand for the LTE-enabled Apple Watch Series 3 has dispelled service providers' doubts about the cellular smartwatch not appealing to customers," said Canalys Analyst Jason Low. Despite strong shipments, the Apple Watch Series 3 did not reach its full potential in Q3. It suffered limited availability as demand outstripped supply in major markets. Service providers had underestimated demand for the new Apple Watch.

According to Low, customers in China have so far been driven away by service disruption, therefore operators need to not only bring in more stock, but also work on their service coverage to cater for expected higher demand in the fourth quarter.

All indications point towards a comeback for the Apple Watch this year, thanks to Apple's wearable division promoting a "tetherless" experience and putting particular emphasis on the device's health features – factors that CEO Tim Cook was eager to highlight in his recent earnings call.

"The ability to go for a run with just your Apple Watch, or go for a quick errand without your phone, while staying connected, is a game changer," said Cook. "Now more than ever, Apple Watch is the ultimate device for healthy life, and is already making a big difference in our customers' lives.

Apple's entire wearables business was up 75 percent year over year in the fourth quarter, according to Cook. In fiscal 2017, it had already generated the annual revenue of a Fortune 400 company.

If supplies are able to meet demand, Apple could be looking at a bumper holiday season for Apple Watch, while the device's continued maturation could be further underlined by its medical potential, such as in the upcoming launch of the Apple Watch heart study. The study will use data from Apple Watch to see if it's possible to identify irregular heart rhythms and notify users when unusual patterns are detected. Indeed, the smartwatch may already be able to accurately detect hypertension and sleep apnea in users, according to a study published on Monday.

I am sure Apple could brand a toaster and it would become the number one selling toaster of all time.

It would be a wonderful toaster with simple but beautiful industrial design - no buttons or levers, just a slot that automatically senses the bread and depresses and gestures to set the darkness level (automatically synced to your other toasters via iCloud). Available either in a clean bright white or a sleek black. It would cost significantly more than competing toasters but would offer complete harmony between heating element and Apple bread (available exclusively through the Apple Bakery App). Status of your toast would follow you seamlessly between all your other Apple devices (iPhone, Apple Watch, Apple TV) and unlike competing toasters from Google there would be no advertisements burned into the surface of your bread. One day the FBI would demand access to your toasting history and Apple would even go to court defending the privacy of your breakfast habits. Yes, it would be the greatest selling toaster of all time.
Score: 7 Votes (Like | Disagree)

44267547
Series 3 was huge for the Apple Watch this year with LTE. It puts the Apple Watch on another sector away from the iPhone from being tethered. And add in the capabilities of GPS, 50 m water resistance, faster dual core processor, the Watch has matured a lot since its inception in April of 2015.
Score: 4 Votes (Like | Disagree)

naturalstar
Happy to read this news. I was more excited for the Apple Watch than any other device during the keynote. I was waiting for LTE capability and finally purchased my first Watch with the Series 3. I absolutely love this device, wear it every day, and hopefully will have a story to share with Apple in the future. Can’t wait to see what future iterations bring.
Score: 3 Votes (Like | Disagree)

twolf2919
Correction: "According to the data, Apple shipped..." should read "According to the ESTIMATES, Apple shipped...". This gets done all the time: reporters, wanting to lend more credence/import to what they're writing, change a word here and there. Screw the fact that what they end up writing is now inaccurate.
Score: 3 Votes (Like | Disagree)

I am sure Apple could brand a toaster and it would become the number one selling toaster of all time.

And I'm sure that if Apple decided to make a toaster, it would deserve to be the number one selling.
[doublepost=1510661886][/doublepost]

Unrelated to Apple but it's nice to see Xiaomi doing so well. To offer such great hardware for the price they is amazing.

Funny, I see it as Xiaomi can offer that price because it has so far been able to avoid law suits in China.
Score: 2 Votes (Like | Disagree)

djcerla
“These are not the failures you’re looking for”
Score: 2 Votes (Like | Disagree)
Read All Comments