Apple recently announced that its retail location within the Chadstone Shopping Center in Melbourne, Australia will be getting a grand reopening on November 24 at 9:00 a.m. local time. The newly relocated Apple Chadstone location will be triple the size of the previous store, and mark the first Australian store to gain Apple's modern retail layout.

Apple Chadstone first opened nearly ten years ago in 2008 with 69 employees, and will now grow to more than 240 with the grand reopening (via Herald Sun). 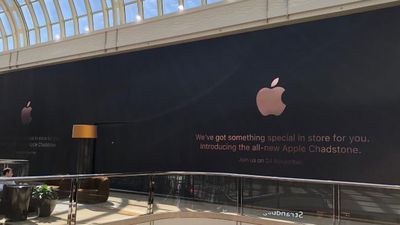 Image via Herald Sun
Apple Chadstone will now feature a Genius Grove, a "boulevard" of window product displays, a boardroom for business meetings with local entrepreneurs and developers, a meeting place for "Today at Apple," and more. According to Apple senior vice president of retail, Angela Ahrendts, Apple Chadstone will lead the way for the rest of Australia's Apple retail locations.


“We’re thrilled to open Apple Chadstone in a stunning new location and introduce Australians to our latest store design,” she said. “We look forward to continuing to build on our 22 stores in Australia.”

In other retail news, Apple Regent Street was robbed today by ten individuals who stole "thousands of pounds worth of laptops and iPads" (via Evening Standard). To get into the store, the robbers drove mopeds through the glass storefront in the early morning hours of Monday, and then in less than three minutes managed to take various products from display stands before escaping on more mopeds waiting outside.

In total, police said the thieves stole iPhones, iPads, Apple Watches and two iPhone Xs, which have since been recovered near Kings Cross. Apple Regent Street is said to be "open as usual" in the wake of the attack, which apparently follows an "epidemic" of moped-related attacks and thefts hitting London recently.

Ten thugs on five mopeds launched a mass raid on the Apple store in Regent Street early today snatching thousands of pounds worth of laptops and iPads.

One customer Hajra Ali, 37, from Ilford, said: “Moped attacks have got really, really bad and I’m not surprised this happened. I don’t know what the Met is doing about it.

For more on the latest Apple retail openings and redesigns, check out or Apple Store Roundup.

Thieves don't care if the devices are bricked. They didn't steal them for personal use. Those devices will either be parted out, sold to some unsuspecting dupe, or sent somewhere deep in the Asian market.
Score: 7 Votes (Like | Disagree)


Thieves don't care if the devices are bricked. They didn't steal them for personal use. Those devices will either be parted out, sold to some unsuspecting dupe, or sent somewhere deep in the Asian market.

I don’t know why people don’t understand this Lol. Every time these articles are posted someone says “the phones are useless!” You really think the thieves stole them to use for themselves? They’re obviously going to sell them as 69Mustang said.

People they sell them too won’t know or they’ll use the parts.
Score: 5 Votes (Like | Disagree)

Thugs on mopeds? :confused: Mopeds? What kind of biker gang is that? Wow, hear something new everyday.

Been very common in London over the last few years - easy to steal, easy to ride and easy to escape on as you can manoeuver them through busy traffic, on the pavement or down narrow alleyways. And there's no doubt that the gangs involved in these moped crimes are thugs - attacking people with hammers and throwing acid into people's faces to steal their mopeds.

These aren't biker gangs undertaking criminal activities, they are criminal gangs who just happen to be using mopeds.
[doublepost=1510586313][/doublepost]

Destroys $5000 worth of stolen mopeds.