The iPhone X is now widely available across the United States, but some new iPhone X owners aren't able to start using their new phones due to carrier activation issues and congestion.

On the MacRumors forums, a number of AT&T users are complaining about activation problems, and there are also reports of activation issues on Twitter and reddit. Some AT&T customers are seeing long wait times for the activation process before it eventually fails with an error message. 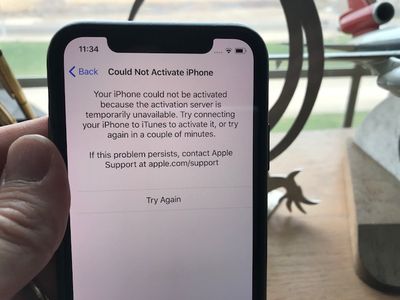 Image via MacRumors reader William
The issue appears to be due to heavy congestion with so many new devices being released into the wild at once. Several of our readers have been able to get the activation process to work after multiple attempts, while others have gotten it to work after a restart or via iTunes. From MacRumors reader anthonymoody:

I called Apple. As another person posted, they had me shut down (hold the large button right side, then swipe to shut down) and restart (hold large button right side). It still didn't work. Told me to call AT&T, which I did. They confirmed their servers are slammed but gave me the automated activation phone number. I called it, system said it was activated (!) But still no joy on the phone itself.

I swapped SIMs with my prior phone...still no joy.

Connected to iTunes and after having to restart the process several times owed to errors (guessing servers getting slammed) I was FINALLY able to get it going - in fact it update to 11.1 and restored from an iOS 11.1 back up in one shot.

While most of the reports seem to be coming from AT&T users, there are also scattered reports from Verizon customers who are seeing activation problems.

Unfortunately, there appears to be no fix at this time beyond waiting or attempting the activation process over and over again. The problem should start to clear up later today as the servers become less crowded, but Apple and/or affected carriers may also be able to implement some kind of fix.

We'll update this post should we hear reports of the congestion clearing up.

Update: AT&T says the activation problem is fixed. AT&T's statement: "Some of our customers experienced a delay activating their iPhone X. The issue was not specific to our customers and is resolved."

840quadra
Sadly Some of them are rushing to activate so they can resell their devices.

Hopefully this clears up soon. No doubt has to be frustrating to those waiting to play with their new device on launch day.

Since it appears that it impacts AT&T Users more (No surprise here, their AW3 Launch day activations were a disaster), I doubt it has much to do with Apple.
Score: 10 Votes (Like | Disagree)

omihek
This is why I'm waiting to get mine. Aw heck, who am I kidding? I just don't have that kind of money. Maybe next year.
Score: 10 Votes (Like | Disagree)

applepizzaz4u
Currently chatting with Apple support about the AT&T activation issues and the rep told me this joke:

Apple is responsible for maintaining the servers of the carriers? Weird.
Score: 5 Votes (Like | Disagree)

AMTYVLE
Gotta wait from the Keynote to Pre-order....Wait for launch day. Launch day gets here, gotta wait again for UPS to deliver....finally get the phone....now gotta wait to activate it because AT&T servers are from 1994 and can't handle this traffic. This is 2017 AT&T, lets get with the program. :mad:
Score: 3 Votes (Like | Disagree)
Read All Comments