Beautiful, Modern, and Fast Reddit Client 'Apollo' Launches for iPhone and iPad After Years of Development

Christian Selig, a former Apple intern, has released a beautiful, modern, and fast Reddit client for iOS called Apollo after years of development.

Apollo was created specifically with Apple's official iOS design guidelines in mind, with input from thousands of Reddit users for over two years. The app is very customizable in the Settings tab, where you can select compact or large post sizes, a light or dark theme, modify gestures, and much more.

The dark mode can be enabled manually, scheduled at specific times, or set to activate automatically based on your device's brightness level.

One of Apollo's key features is the Jump Bar, which allows for very quick switching between subreddits. When browsing a subreddit, simply tap its name in the top navigation bar to search for and go to another subreddit. A favorites window also appears with a list of any subreddits you have starred.

Apollo also includes an impressive media viewer for viewing, sharing, saving, or copying images, GIFs, videos, albums, and more from a variety of sources. A premium GIF scrubbing feature enables users to slide their fingers across a GIF in the media viewer to go backward or forward in the animation.

I really think an iOS app should look and feel like an iOS app, and an Android app should respect Material Design. I think designing for the middle results in a clunky experience where the potential of both platforms is never realized to the fullest. Apollo is an iOS app period, built to take advantage of iOS features and feel like a beautiful, familiar iOS app. I also think they discontinued Alien Blue without incorporating the best parts of it that people loved the most, such as the minimal, uncluttered UI (Alien Blue was much more compact and concise), as well as powerful features like swipe to collapse comments, full screen, inline previews for links in comments, etc. Apollo has all that and more, because I think it's essential part of browsing on iOS.

The developer also sees it as a suitable replacement for Alien Blue, which Reddit abandoned to focus on its official iOS app early last year.


Apollo is rolling out on the App Store [Direct Link] today as a free download without ads, with an optional $2.99 in-app purchase available to unlock features such as submitting posts, multiple accounts, a customizable app icon and gestures, Touch ID or Face ID authentication, and GIF scrubbing.
Tag: Reddit
48 comments

ChristianSelig
Hi! Apollo developer here, I've read MacRumors since before I bought my first iPhone let alone knew I wanted to get into iOS development. This is really an honor of a lifetime for me.

If you fine folk have any questions I can answer, I'd be more than happy to! My subreddit is getting hammered with questions so obviously I'll do my best to do it in a timely manner if there are any. :)
[doublepost=1508788875][/doublepost]

I know the official Reddit app gets a lot of heat (not sure why). I've been 100% fine with it and it does everything I need. The biggest thing for me is having notifications.

I totally hear you, I had notifications working in a previous build (and as a bonus they don't notify you three times a day about trending posts) but there were a few bugs I wanted to work out before adding it back in, and I didn't have time before the release. So they'll be there soon. :)

Okay.. downloaded this, looks awesome, but it's not registering an account for me, nor does it remember earlier attempts.. I've been through this twice, and not especially interested in wasting my time a third time without some input as to what the hell is going on.

That's… really odd. Sorry! So are you registering from scratch? I'll definitely look into this and see what I can do, thank you.
Score: 15 Votes (Like | Disagree)

I'd like to download the app but Apple doesn't let me purchase applications on my Mac anymore: 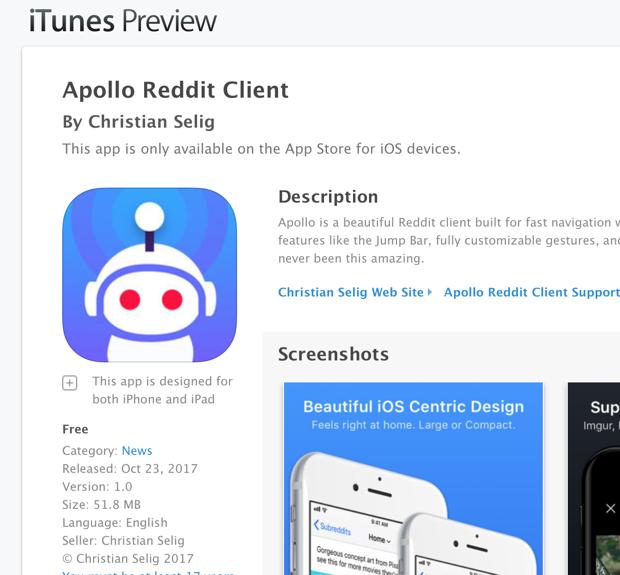 Umm, so just purchase it on your iOS device? I'm confused as to what the problem is.
Score: 5 Votes (Like | Disagree)

Howl's Castle
The developer is extremely kind! go to apolloapp.reddit.com to visit his subreddit
Score: 5 Votes (Like | Disagree)

Anyone know if this supports notifications? Any paid/upgrade features?

Notifications are coming, they were there during the beta, but he had to leave it out of the 1.0 release to work out a few kinks. Paid upgrade features in include submitting posts, auto dark mode, multiple accounts, gesture customization, locking with Touch ID/Face ID, and more that I can't think of off the top of my head. The dev is super responsive as well and really takes feedback and feature requests into consideration (a ton of Apollo's features were added by beta testers requesting certain things). Pro is definitely worth buying, especially considering it's only $2.99.
Score: 3 Votes (Like | Disagree)

jdillings
But is it artisanal?
Score: 3 Votes (Like | Disagree)
Read All Comments