Two weeks after first unveiling the Pixel 2 at an event in San Francisco, reviews of Google's latest smartphone have now been published online. Many of the reviews written on the Pixel 2 and the Pixel 2 XL are positive, with multiple articles referring to the smartphones as the best Android devices on the market, as well as legitimate competitors to Apple's iPhone series. The only slight negatives appear to surround Google's decision to aim for functional, more iterative updates over flashier feature additions.

Like most reviews posted today, The Verge was more impressed by the design and look of the Pixel 2 XL than the smaller Pixel 2, calling the latter phone "humdrum" with "big, chunky bezels" that don't compare favorably to the XL's smaller bezels and larger 6-inch screen. The site noted that each device's Qualcomm Snapdragon 835 processor and 4GB of RAM resulted in a snappy UI, running "better overall than Samsung's or LG's" version of Android. 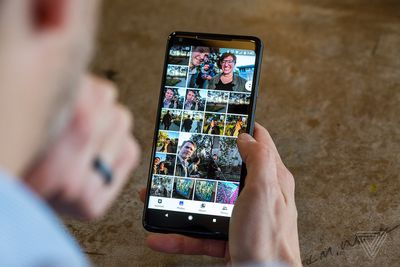 Image via The Verge
The Verge described an all-day battery life that "lasts until bedtime just fine," and said that the Pixel 2 is "easily a contender for best smartphone camera" with photos that are "way sharper than the iPhone 8 and the Note 8." Although the site had qualms with the 2 XL's display quality -- calling colors "muted" -- the overall takeaway came down to being impressed by the smartphone's snappy functionality, despite a lack of "razzle dazzle."


The Pixel 2 and Pixel 2 XL do not razzle dazzle. It's not just the somewhat disappointing screen on the Pixel 2 XL, it's that Google has gone out of its way to do things that are functional instead of flashy. Instead of going bezel-less, it added front-facing speakers. Instead of a million camera effects, it focused on one or two, while making the core camera experience much better with machine learning. The list goes on.

The Pixel 2 has many, many things going for it. Were it not for a few problems — the screen, the slightly inelegant design, and (yes) the lack of a headphone jack — it might have received the highest score we've ever given a phone. As it is, it's a great phone, but not quite a home run.

TechCrunch compared the second iteration of the Pixel line -- focusing its review on the Pixel 2 XL -- to an "S" generation of the iPhone, meaning that the Pixel 2 is an "evolution" of a smartphone that was already solid, but lacks a central "wow factor." Still, the site was impressed by what Google accomplished with a single-lens camera system, describing "admirable" performance in low- and mixed-light settings, and mostly positive early impressions from Google's AI-powered "Lens" feature, which automatically tags objects in pictures.

Image via TechCrunch
Even though the Pixel 2 XL runs for upwards of $800, TechCrunch ultimately stated that Google's smartphone shows "what can be done without having to charge users $1,000 for a device."


The Pixel 2 doesn’t make a particularly compelling upgrade case for users of last year’s model. The hardware isn’t a radical departure, and many of the new software features will be coming to the first-generation model — after all, Android support for older devices is one of the key tenants of Google’s first-party software approach. The device also doesn’t push the boundaries of what a mobile device is as much as other recent flagships.

The new phones offer a glimpse at that future and, in the case of the device’s camera, show what can be done without having to charge users $1,000 for a device.

Ars Technica looked at the performance of the Pixel 2, calling Google's build of Android for the new smartphones "the most highly optimized, smoothest, and fastest build of Android I have ever seen." Although the site had similar problems with the OLED display as The Verge -- Ars called it "an ugly graniness" most detectable in dark environments -- and the "dated aesthetic" of the 5-inch Pixel 2, its final impression was that Google's new smartphone is "the best Android phone out there."

The Pixel XL, Pixel 2 XL, and iPhone 8 Plus via Ars Technica

Every single animation goes off without a hitch. Scrolling is flawless. There are additional, exclusive animations on the home screen like bounce scrolling and folder opening that add to the buttery smooth feel. It's amazing—head and shoulders above every other Android phone out there.

With the Pixel, you get an iPhone-like update experience, a cohesive software package, and super fast UI performance. It offers a harmonious device with a single, cohesive design language and none of the junk that slows your phone down. In 2017, that's enough to merit the title of "Best Android phone."

Interestingly, Ars Technica also pointed out that the Pixel 2 marks Google's first foray into its own custom designed system on a chip (SoC), packed into the smartphone in addition to the Qualcomm Snapdragon 835 SoC. Although not active yet, the chip is said to be "dedicated exclusively to camera image processing" on the Pixel 2, and will eventually make processing photos "faster and more efficient than ever." Google calls the SoC the "Pixel Visual Core," and it includes an eight-core Image Processing Unit capable of more than three trillion operations per second.

Crosscreek
None of the phones seem to WOW me any more including Apple except for the price they expect consumers to pay.
Score: 39 Votes (Like | Disagree)

This is kind of what I figured, but I just can't get behind the design. Already outdated.

Function over fashion any day of the week. Apple could learn a thing or two, especially on the MPB line from others.
[doublepost=1508252270][/doublepost]

I want the iPhone to have the best camera.

Too bad that you have to upgrade to the top of the line to have it. I applaud Google's approach. Same hardware across the line, you just pick the size of the phone you want.
Score: 18 Votes (Like | Disagree)

drewyboy
So in other words, if you have to have the shiniest thing, the Pixel line is not it. If you want one of the best cameras, it sounds like the Pixel 2 is the one to get.

This is exactly what I'm looking for. Camera is my #1 priority for a smartphone. So far, everything I've seen is Pixel 2 handily beats iPhone 8.
Score: 14 Votes (Like | Disagree)

With the Pixel, you get an iPhone-like update experience,

So is that supposed to be a pro or a con?

BornAgainMac
I want the iPhone to have the best camera.
Score: 9 Votes (Like | Disagree)

bitfactory
My how times have changed - now it's Android users paying full price for a phone that's literally half the speed of iPhones.