Microsoft has revealed a redesign coming to its Outlook apps for Mac and Windows platforms, which is described as aiming for a "simplified" user interface that falls in line with the Outlook app for iOS. The Verge detailed the new and less complex version of Outlook on desktop, which was first spotted by MSPowerUser.

The Mac and Windows apps will feature a single-line ribbon that will be customizable so users can control which buttons are available, tailoring the email client to more easily accomplish their most common tasks. Clutter will be reduced with a smaller set of default commands, and the left navigation panel will include quicker access to folders across multiple accounts, visually similar to the switcher in Outlook on iOS. 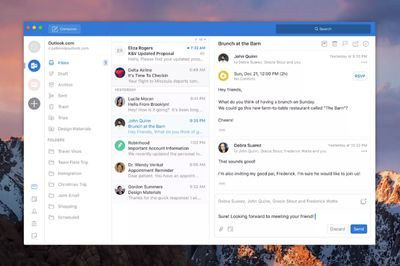 Images via The Verge
Microsoft is said to have admitted that "MacBooks are popular amongst key influencers and decision makers," so the company decided to overhaul its email client "to win these users by delivering the best Outlook has to offer." Besides the design changes, Outlook for Mac will gain improvements to search and its calendar functions.

Search will become faster and "more reliable," as well as be easier to access in the app's top right corner. For the calendar, users will see an overall improved interface that makes managing appointments less of a hassle.

Microsoft hasn't yet detailed when the new Outlook will launch for Mac and Windows, but the company is said to be testing internal versions of the software for both platforms. Before the major update, a few minor additions will launch on Mac, including the ability to slide-to-delete messages via Apple's Magic Trackpad and a way to insert tables into emails.

It's expected that the redesigned app will debut in updates first made available for Office 365 subscribers, and then launch in Office 2019.

Why would anyone outside of a business use Outlook on a Mac ?

I hate to admit it but outlook is better than apple mail. First off it actually works with our exchange 2016 mail server while apple mail fails to connect. Second, the calendar integration is much better. It's much easier to add shared calendars in outlook than it is in apple mail. I'm usually a fan of Apple's stuff, but this time I'm man enough give credit to the competition because it's simply better.
Score: 8 Votes (Like | Disagree)

Plutonius
Why would anyone outside of a business use Outlook on a Mac ?
Score: 3 Votes (Like | Disagree)

The ribbon only made sense in Windows cause that system does not have the ever present menu bar (may macOS Full screen would make sense here).

This is actually the reason I think Office on macOS is FAR superior to Office on Windows. The Menubar... that doesn't even exist anymore in Windows. I hate that you have to click these little arrows to access menus from the ribbon... and even worse, my biggest gripe, that you don't have a file MENU... but a file SCREEN... that takes you away from your documents...
Score: 2 Votes (Like | Disagree)

H.Finch
I never expect MS to get anything really right and do something with taste... However the only thing that could make me change my e-mail client is Apple's ridiculous way of handeling attachments in mail...
Score: 1 Votes (Like | Disagree)

TheralSadurns
Wow... this actually sucks. While I never thought the Ribbon was a good idea (taking up to much vertical space of widescreen displays) this actually makes it A LOT worse.
Score: 1 Votes (Like | Disagree)
Read All Comments