Apple today announced it will be opening two so-called "Mac Labs" at the KM Music Conservatory's campuses in the Indian cities of Chennai and Mumbai. The labs will teach students how to create music using Logic Pro X. 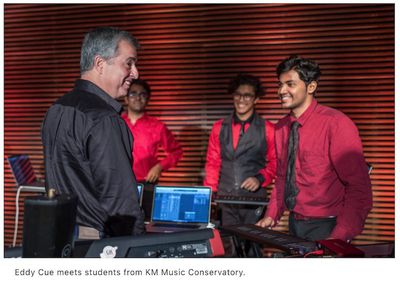 Apple also said it will fund 10 full time musical scholarships at the learning institution for students from underprivileged backgrounds.

Great to be in Mumbai w/ @KMMC_Chennai. Proud to be supporting @arrahman & investing in the futures of these talented musicians & students. pic.twitter.com/mU2GzPMNfc — Eddy Cue (@cue) October 11, 2017

Apple's services chief Eddy Cue traveled to Mumbai this week, where he announced the news in person alongside A.R. Rahman, an Oscar-winning composer, producer, musician, and founder of the KM Music Conservatory.

"It's an honour to be in Mumbai and I am humbled to be in the presence of the talented A.R. Rahman to make this announcement together," said Cue. "Apple Music and the KM Music Conservatory share a deep love in discovering, sharing and nurturing musical talent and we're proud to be supporting such an institution that is investing in the future arts and music community."

The A.R. Rahman Foundation founded the KM Music Conservatory in 2008. The higher education institution offers a range of part-time and full-time courses in Western and Indian classical music and audio technology.

MH01
Back in the day, there would have been a Mac Pro in shot .....soon the Apple Watch will be faster :p
Score: 3 Votes (Like | Disagree)

Wow, I hope you do feel better after hurling that poorly written vomit.

But I suppose just having lived in a country for most of your life is far better criteria than Apple India Management.
I mean duh, they should come to consult you. You even speak two Indian languages. *Slow Claps*

While you do talk about corruption, there is no denying that most developing countries face this predicament, but not only are most of these countries trying to improve upon it, it's just ridiculous to think a multi billion dollar company such as Apple has not thought this through? Please.

Afterwards you talk about Amazon, which is actually pumping more and more money into the Indian market and are about to corner. You should be reporting those delivery agents. Could be a "rural North India" issue. But I wouldn't know, I live in Mumbai. The name changed in 95', but go on, might I even suggest what us 90s kids are calling it now? #BomBae. Ha.

I think am going to just ignore the last paragraph, as *sigh* that was just..

Well to start with there's no reason for insults - you rather demean yourself.

I am half Indian, have lived in Bombay and Delhi most of my life, growing up in Bandra in the 90s and absolutely have the right to speak on Indian issues. India is one of the worst nations in the world for corruption. Simply stating facts is hardly something to criticise - unless you like "alternative facts"? Of course I have reported bad behaviour but it takes a long time, if ever, to change hundreds of millions of people. There is much that is good about India but there are problems too - if you can't stand someone stating those truths without insult then I'm afraid the internet probably isn't the place for you. It's actually something economists can measure - how much of an original $100 investment reaches the final sale and India gets appalling scores.

Your faith in corporate decision making is touching but history tells us you are very wrong, companies frequently make mistakes. Those pesky things called facts again!

Actually the name "Mumbai" is far older than 1995 - it dates back about 400 years. As does the name Bombay. Mumbai is the name in Marathi, Bombay is the name in English. I wonder if you even know the original name of Bombay? The Shiv Sena has no jurisdiction over the English language and their sectarian campaign to try to force non-Marathis to use a Marathi name is something I cheerfully ignore - as do most of the family and friends I know who still live there. At best they will call the bad parts of the city "Mumbai", while ever the city retains some multiculturalism, some Jews, Parsis, Catholics and Muslims those parts will always be Bombay. As Salman Rushdie wrote in The Moor's Last Sigh "those who hated India, those who sought to ruin it, would need to ruin Bombay". Well some of us will always stand up for minorities against the nationalists and fascists.

I'm perfectly happy to correct your specific errors but will offer a general point - online when people write things, try not to respond with insults and you'll find people far more receptive.
Score: 2 Votes (Like | Disagree)

I usually type End Marker values at the production stage, so I can make the track freezing process faster. Later, when I'm mastering, I make all the fine adjustments needed to let the audio tail decay.

The problem I have with that is the impermanence of the end marker; it shifts position when you add new content, with no way that I've been able to find to lock it into position. So adjusting it is my last step.
Score: 1 Votes (Like | Disagree)

How about, Final Cut Pro X as well?

joueboy
Oh no! So they can make more dancing music on the movies like this. SMH!
Score: 1 Votes (Like | Disagree)

SoulCloud
Off the topic: In these pictures, Cue looks more like a talent scout of an escort agency than a serious business executive :)
Score: 1 Votes (Like | Disagree)
Read All Comments