Microsoft today announced some major changes to its Outlook app for the iPhone and the iPad, introducing a redesigned conversation experience, improved navigation, and smarter search features that are coming in the near future.


The enhanced conversation design displays more of a conversation on a single screen, and there's clearer separation between each individual message. When opening a conversation to read more, Outlook will bring you to the first unread message, and there's a new quick reply feature that makes it easier to send an email without leaving the main conversation view. 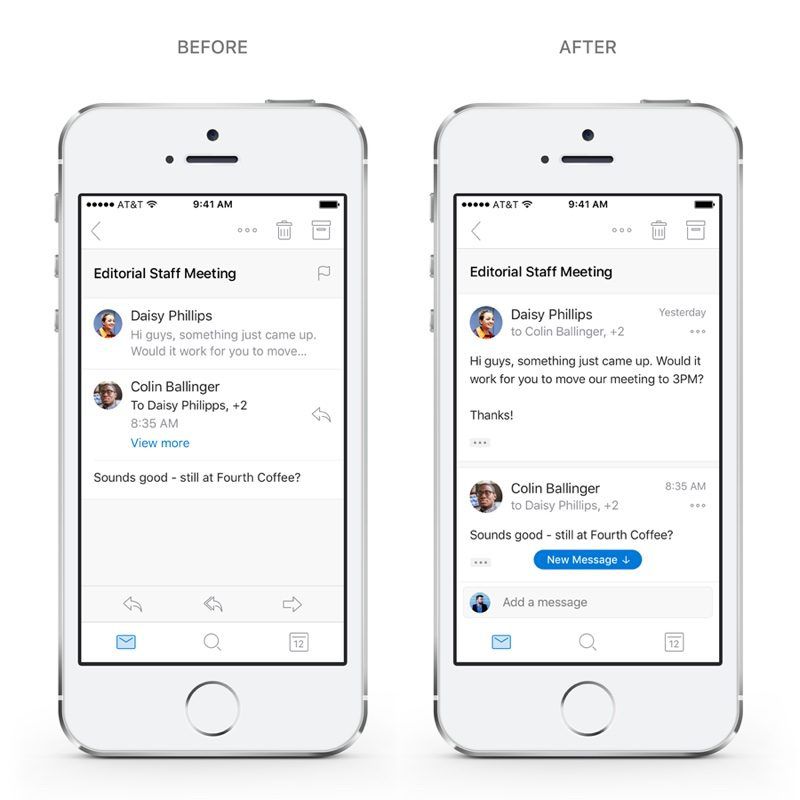 As for the navigation improvements, Microsoft has made it easier to switch between accounts and browse through their folders. The account and folder menu has been tweaked so you can swap accounts with a tap, and the Help and Settings buttons have been relocated to the sidebar to make them easier to access.

In the near future, Microsoft plans to introduce an intelligent search feature (powered by Microsoft Graph) that will make it easier to find specific conversations. A search box will be added to the app's tab bar, so it'll be accessible from anywhere in the app, and People and Files will both be integrated into the search experience.

Microsoft plans to provide proactive suggestions for content, and when searching for a name, your most frequent contacts will pop up first.

The redesigned Outlook app is available today for all iOS users with Outlook.com and Gmail accounts. Support for Office 365 accounts will roll out "in the coming days." As for the search feature, Microsoft says it is "coming soon."

Microsoft Outlook can be downloaded from the App Store for free. [Direct Link]

DocMultimedia
I'll be honest, it's not a bad app when you are forced to use Exchange mail.
Score: 3 Votes (Like | Disagree)

Pirate515
Yet it's missing the most crucial feature to me, which is Notifications for Subfolders. The way it is currently set up, it only notifies you for messages landing in Focused and/or Inbox. As far as messages filtered into other folders, no go. Have been asking Microsoft for this since the day Outlook for iOS came out, which is more than 2 years now, and still nothing. Stock iOS Mail app has this from almost very beginning.
Score: 3 Votes (Like | Disagree)

Der Keyser
I still don't get why they hold on to the serverbased model where they collect all your exchange passwords (if you have more than one) and store those to login to your various exchange servers and fecth your mail to their server.
I'll be damned if I'm ever going to put all my passwords out there waiting for some hacker to grab ALL the passwords for every outlook for IOS user in the world - or even more obvious... have NSA along on everything I do.
Score: 2 Votes (Like | Disagree)

apfelbaum
Still no setting to block downloading content from external servers, something that EVERY basic email client has, including Outlook on Windows and macOS. No idea why STILL they are unable to put it into the iOS app, but an email client that just loads content from every server and lets every potential spamer know, that the email has been opened is an absolute no-go and should be for everyone.
Score: 2 Votes (Like | Disagree)

Its a good app but the hand holding of passwords is what turns me off from using it for all my email accounts.


Every email client needs your auth info to access your data. Their method of storing an encrypted version in the cloud and only storing a unique key on your device is better than makeing your type it ever time or actually storing it on your device.
Score: 2 Votes (Like | Disagree)

HaywireTX
By far the best email app out there!
Score: 1 Votes (Like | Disagree)
Read All Comments