Apple has recently unveiled interactive HomeKit experiences in 46 of its retail stores worldwide, allowing customers to test out its smart home platform free of charge, according to TechCrunch. 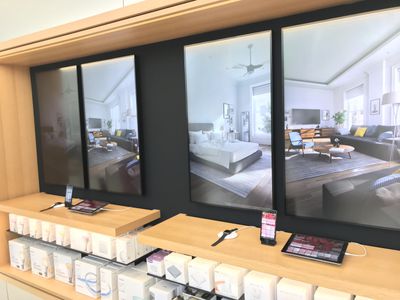 Interactive HomeKit demo area at an Apple Store via TechCrunch
Each interactive setup consists of two vertical displays positioned behind an iPhone, iPad, and Apple Watch with the Home app, which customers can use to control accessories in the virtual room, such as lights and ceiling fans.

Now, when you go into Apple’s new retail stores, you’ll be able to use the Home app from either an Apple Watch, iPhone or iPad to control devices like the Phillips Hue light bulb, the Hunter ceiling fan and many others. If you tap to the lower the shades in the living room, for example, you’ll see the shades lower in the house shown on the screen.

In the United States, customers can try HomeKit at Apple's flagship Union Square store in San Francisco, its World Trade Center and Williamsburg stores in New York City, and 28 other stores not named throughout the country.

The experience is also available until at least December in 15 stores outside of the United States, including select locations in the United Kingdom, Germany, Mexico, Singapore, Taiwan, and the United Arab Emirates.

At every other Apple retail store, the company will be offering non-interactive HomeKit experiences, according to the report.

HomeKit enables Apple users to control lights, switches, thermostats, fans, and other products with its Home app and Siri voice commands. HomeKit-enabled accessories can be controlled singularly, or in scenes, which enable multiple accessories to work in combination, all with a single command.

hortod1
if they really want to get the word out they should setup a display at places like Home Depot and Lowes as well. My folks are iPhone/iPad people but they always purchase at BestBuy - they rarely venture into an Apple Store. Home Depot/Lowes on the other hand - they're always in there. Seems like apple could reach a lot more people that way.
Score: 11 Votes (Like | Disagree)

HoosBruce
Very cool. I’m glad this is finally becoming stable and mainstream enough that many people who have never heard of it can walk into an Apple store and just discover it and play with it for the first time.
Score: 4 Votes (Like | Disagree)

? Really what are you using ? I've 6 Philips hue lights and very rarely have connectivity problems
Score: 4 Votes (Like | Disagree)

TheShadowKnows!
I am at a loss on the value of such display. It is all synthetic and devoid of realism.

You launch an app, press a bottom or glide a slider up or down, and predictably the fixed display turns/attenuates on, or off, the virtual target. [Of course, it never fails. LOL!]

At least they could have placed physical devices (locks, lights, fans, ...) to show their ease of remote control.

I think that Apple could have afforded to do much better. But that is just me.
Score: 3 Votes (Like | Disagree)

DoctorTech
I think this virtual, interactive demo is a good balance of cost efficiency and functionality. It lets people with zero home automation experience see what it would be like to control lights, shades, locks, etc. via their Apple Watch or iOS device while still not taking up much room in the store. I agree with the comment above that this needs to move beyond Apple Stores into Best Buy, Lowes, Home Depot, etc. Maybe this is just a pilot and the broader roll out will occur once Home Pod is released.
Score: 3 Votes (Like | Disagree)
Read All Comments