During the quarter, Apple shipped an estimated 4.24 million Macs worldwide, down from 4.26 million in the second quarter of 2016, for an estimated decline in growth of -0.4 percent. While sales were down slightly, market share was up. Apple held 6.9 percent of the market during the quarter, up from 6.7 percent a year ago. Apple is estimated to be the number four PC vendor in the world, edging out Asus, the company that held that position this time last year.

"Higher PC prices due to the impact of component shortages for DRAM, solid state drives (SSDs) and LCD panels had a pronounced negative impact on PC demand in the second quarter of 2017," said Mikako Kitagawa, principal analyst at Gartner "The approach to higher component costs varied by vendor. Some decided to absorb the component price hike without raising the final price of their devices, while other vendors transferred the costs to the end-user price." 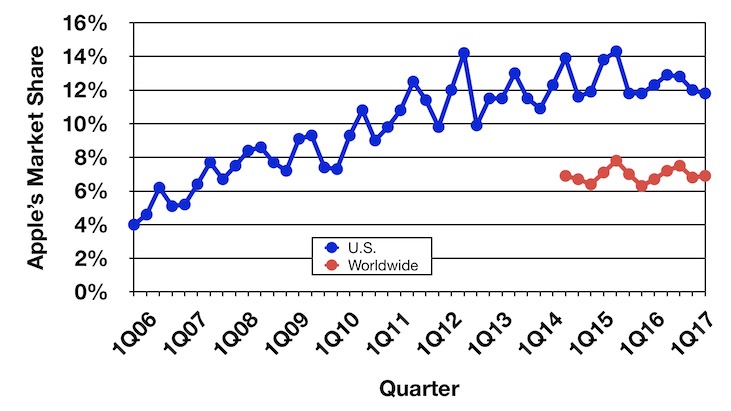 IDC also released its PC market shipment estimates today, and its numbers are a bit rosier. IDC estimates Apple shipped 4.3 million Macs during the quarter, up from 4.26 million for a small 1.7 percent growth. According to IDC, worldwide PC shipments totaled 60.5 million units, a decline of 3.3 percent. Like Gartner, IDC estimates Apple is the number four worldwide PC vendor, behind HP, Lenovo, and Dell, but above Asus and Acer.

It's important to note that data from Gartner and IDC is preliminary and that the numbers can shift, sometimes dramatically and sometimes less so. Last year, for example, Gartner estimated Mac shipments of 4.56 million in the second quarter of 2016, but the actual number was 4.26 million.

Apple recently refreshed much of its Mac notebook lineup and its iMacs, so it could see some growth in the coming quarter as customers purchase the new machines.

kukhuvud
And yet sales of the older models of MBP's jumped after Apple released the dumb new ones.

magicschoolbus
well when you release a product that is more expensive, glued together, cant sync with your flagship product out of the box, and isn't any more functional then the cheaper product released a few years ago.. this is what happens.
Rating: 39 Votes

Dongle city + much higher prices = declining sales. Apple should have slashed those prices in June.

Nobody wants to pay hundreds more for a machine that's only marginally better than older models, and requires a dozen dongles.
Rating: 38 Votes

McScooby
So just when the prices went up? Ain't rocket science, drop the price!;)
Rating: 36 Votes

Mr. Dee
You gotta admit, Apple has kinda priced themselves out of the mainstream. Other factors include: mobile being a preferred computing platform for many (smartphone and tablets); and existing devices lasting longer. I don't think Apple will recover from this in way where you are going to see sales like 10 million per quarter, but the company needs to be more reasonable and moderate with pricing. No matter how advanced and sophisticated, $2,300 is asking too much in 2017. The highest end MacBook Pro should cost no more than two grand maxed out. With over 200 billion in the bank, Apple is not on the brink of bankruptcy, the company can start passing down some value to customers.

Hopefully, next years revision of the MacBook Pro in particular will see some significant price drop and come on, 256 GBs on an entry level 15 inch MBP is ridiculous. The retina MacBook needs to take the place of the MacBook Air. Its basically high priced Intel Atom Netbook in different colors.

With all this said, maybe Apple is happy with the way things are. Its just an inevitable path where your default computing will supplied by iPad Pro, iPhone, Apple Watch and AirPods.
Rating: 24 Votes

Apple [...] needs to be more reasonable and moderate with pricing.


I got my Macbook Pro in 2015. If I wanted to get a new one right now - Apple would sell me the same processor but with a slower speed, half the SDD storage space and I would have to pay MORE for that.

Does that make sense? Not to me, but it does to Tim "F. the Customers" Cook.
Rating: 21 Votes