Prime Minister Modi kicked off his U.S. visit by telling the CEOs that India's growth presented a "win-win" opportunity for both nations, referring to his government's attempts to improve the business climate, including a unified Goods and Services Tax (GST) that he hoped would encourage American companies to invest there. 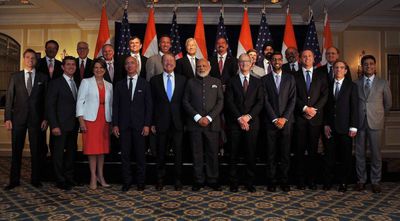 "The whole world is looking at India. 7,000 reforms alone by GOI for ease of (doing) business and minimum government, maximum governance," Gopal Bagley, spokesman of the Ministry of External Affairs said in a tweet from inside the meeting, quoting the prime minister.

India's growth presents a win-win partnership for the country and the US, and American companies have a great opportunity to contribute to that, Modi told the CEOs, according to Bagley.

The Prime Minister reportedly listened to the wish lists of the CEOs in attendance, with some voicing their concerns about tax rates under the coming GST regime. Modi, meanwhile, stressed the importance of cooperation for start-ups, for innovation and for tapping the intellectual, educational, and vocational training potential in India.

Apple is in talks with Indian government officials to expand its fledgling iPhone manufacturing base in the country, following discussions last year with Prime Minister Modi, who has been working to promote his "Make in India" initiative. Apple is also creating a new distribution center in India to consolidate its logistics and supply chain in the country.

The company will reportedly begin selling iPhones directly through its website in India later this year, and is expected to open its first physical retail store in India as early as 2018. Apple is said to be looking to open four to five flagship-class stores in the country over the next five to ten years.

Prime minister Modi's two-day visit continues on Monday, when he will meet President Trump to discuss trade and investment issues between the two countries.

Nothing, as long as he's increasing the profit margin

Yeah, since he's really into social justice, you'd think that he would personally launch the Pride edition watch band in Saudi Arabia and Pakistan. Oh wait, they might actually get him killed so he'll just pontificate from the safety of his luxurious office.
Score: 5 Votes (Like | Disagree)

I wonder what he thinks about India's LGBT protections, or lack thereof.
Score: 3 Votes (Like | Disagree)

I wonder what he thinks about India's LGBT protections, or lack thereof.

Nothing, as long as he's increasing the profit margin
Score: 3 Votes (Like | Disagree)

Aluminum213
If only he smiled like this with President Trump, a true patriot is who turning this country around