With just four days to go until the 2017 Worldwide Developers Conference, Apple has started decorating the McEnery Convention Center in San Jose, where the event will be held.

Based on images shared on Twitter, the Convention Center is being decorated with banners, flags, and other artwork. The design Apple is using matches up with the design that was seen on the original announcements, featuring a top-down view of people in colorful outfits. 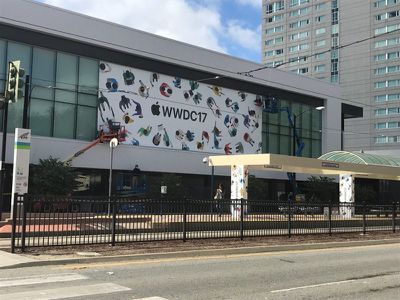 An entire side of the Convention Center has been covered in the design, as has the VTA station in front of the building. The artwork was created by Los Angeles artist Geoff McFettridge

This year's event in San Jose is the first Worldwide Developers Conference that's been held outside of the Moscone Center in San Francisco in many years. Apple expects to host about 5,000 developers, with hundreds of Apple engineers available to answer questions and host app development sessions.

The Worldwide Developers Conference will kick off on June 5 at 10:00 a.m. with a keynote event where Apple is expected to debut iOS 11, macOS 10.13, watchOS 4, tvOS 11, and several hardware products, including new Mac notebooks, new iPads, and perhaps the much-rumored Siri speaker.

For the June 5 keynote, MacRumors will provide a live blog both here on MacRumors.com and on our MacRumorsLive Twitter account, along with detailed coverage of everything Apple announces during the week.

Nautilus007
Prepare for yet another disappointing WWDC.

I remember the good ol, "one more thing" days where there was actually awesome releases not just incremental improvements (new color smart covers, that cost double with no premium leather available, is an example)

Maybe I need to lower my expectations.
Score: 13 Votes (Like | Disagree)

macduke
I can't wait! My quick list of wants:

Did anyone find any hidden meaning in decorations yet?

Apple users are confused, lost and scattered around.
Score: 9 Votes (Like | Disagree)

Lol, why do you say that?

Probably because the artwork is a birds eye view of people using their devices?
Score: 7 Votes (Like | Disagree)
Read All Comments