In a new study comparing the accuracy of seven different fitness trackers, the Apple Watch was found to have the lowest margin of error when measuring heart rate, beating the Basis Peak, Fitbit Surge, Microsoft Band, Mio Alpha 2, PulseOn, and Samsung Gear S2.

Researchers set out to determine the accuracy of wrist-worn devices at measuring both heart rate and energy expenditure, aka calories burned via physical activity. 60 volunteers participated, including 29 males and 31 females, each of whom wore several fitness trackers and completed activities like cycling, running, and walking. 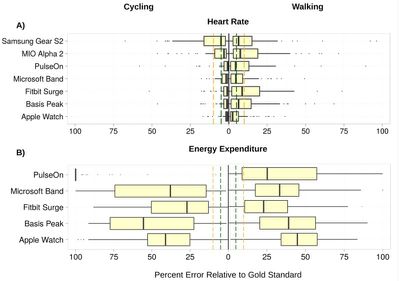 Data gathered by the fitness devices was compared against a "gold standard" tracking method, which included an electrocardiograph (ECG) for measuring heart rate and clinical grade indirect calorimetry (measuring oxygen and carbon dioxide expelled when breathing) for measuring calories burned. An error rate of 5 percent was determined to be within acceptable limits.

Across all of the modes of activity, the Apple Watch had the lowest median heart rate error at 2 percent (1.2% to 2.8%), while the Samsung Gear S2 had the highest error rate at 6.8 percent (4.6% to 9%). The Apple Watch was also notably more accurate at measuring heart rate during the walking test than competing products.

When it came to measuring calories, no device, Apple Watch included, managed to accurately determine how many calories were burned through activity. Median error rates across all devices and tasks ranged from 27.4 percent (Fitbit Surge) to 92.6 (PulseOn). Though no device was accurate, the Apple Watch did the best at estimating energy expenditure.

Overall, researchers found that most of the fitness trackers tested were able to measure heart rate with an acceptable error level in a laboratory setting, but calorie estimates are largely inaccurate.

There are three principal findings from the current study. In a diverse group of individuals: (1) most wrist-worn monitoring devices report HR with acceptable error under controlled laboratory conditions of walking, running and cycling; (2) no wrist-worn monitoring devices report EE within an acceptable error range under these conditions; (3) of the devices tested, the Apple Watch had the most favorable error profile while the Samsung Gear S2 had the least favorable error profile.

The full study, conducted by Stanford University and the Swedish School of Sport and Health Services, is available in the Journal of Personalized Medicine.

OldSchoolMacGuy
Apple puts a lot into R&D and calibration. They know they're the biggest target when it comes to accuracy. Most wouldn't care if FitBit or Samsung aren't overly accurate but you'd see headlines everywhere if Apple were off.

Here's an interesting read on the level technicality they went through to make it incredibly accurate at telling time. It's 4x more accurate than the iPhone actually.

Seoras
So I read the article. Apple does something better than the competition. Then, just for laughs, I come here to the forum to read the howling and gnashing of teeth from the haters who want to tear them down.
I'm never disappointed, you guys are so entertaining! (& so full of it.) :)
Score: 20 Votes (Like | Disagree)

NightStorm
Why don't these studies ever compare the Apple Watch with more hardcore fitness watches like those from Garmin or Sunto?
Score: 17 Votes (Like | Disagree)

Exactly. Garmin is such a giant in the fitness field, that to leave them out seems suspicious.
Score: 13 Votes (Like | Disagree)

I'm not sure why the study didn't include a Garmin product. This was how the trackers were selected:

Especially galling since they bothered to include the discontinued Microsoft Band.
Score: 9 Votes (Like | Disagree)
Read All Comments

Sunday February 5, 2023 6:07 am PST by Joe Rossignol
Apple has discussed selling a new top-of-the-line iPhone alongside the Pro and Pro Max models in 2024 at the earliest, according to Bloomberg's Mark Gurman. Based on this timeframe, the device would be part of the iPhone 16 lineup or later. In a September 2022 edition of his weekly "Power On" newsletter, Gurman said there was "potential" for an iPhone 15 Ultra to replace the iPhone 15 Pro...
Read Full Article • 306 comments