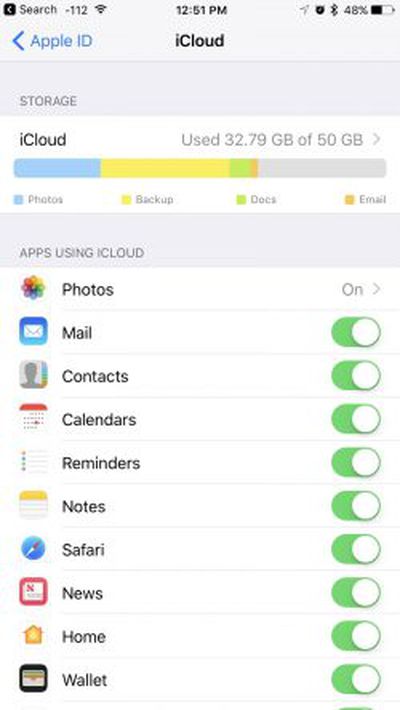 Apple today sent out emails to a small number of iCloud users, warning them that a bug in iOS 10.3 may have caused some iCloud services that had been disabled to be mistakenly re-enabled.

The email asks iCloud users to revisit their iCloud settings to make sure to turn off any service that might have been turned on through the iOS 10.3 update.

It's not entirely clear which iCloud services might have been affected, but MacRumors reader Karl, who sent us the email, said that he typically disables iCloud Mail. Following the update, he found the Mail option turned back on.

We discovered a bug in the recent iOS 10.3 software update that impacted a small number of iCloud users. This may have inadvertently reenabled some iCloud services that you had previously disabled on your device.

We suggest you go to iCloud settings on your iOS device to make sure that only the services you'd like to use are enabled.
Learn more about how to manage your iCloud settings or contact AppleCare with any questions.

iOS 10.3, released on March 27, introduced a new Apple Filesystem among other major features like Find My AirPods, plus it included an overhauled iCloud storage breakdown, which may explain why some iCloud services were mistakenly turned back on.

To check which iCloud services are enabled on your iOS device, open the Settings app and scroll down to the "iCloud" section. A list of apps and services using iCloud is front and center, and anything that was enabled via iOS 10.3 can be turned off using the toggle buttons.

Apple_Robert
Good on Apple for being proactive and emailing those who might have been affected.
Score: 12 Votes (Like | Disagree)

radioisotope
Can we just have one update that fixes more than it breaks?
Score: 11 Votes (Like | Disagree)

To check which iCloud services are enabled on your iOS device, open the Settings app and scroll down to the "iCloud" section.

This is no longer the way to do it (at least on my iPhone since 10.3). You have to open the Settings app and then tap your name at the top, then press "iCloud" in that menu. There's no longer an "iCloud" section to select on the main Settings menu.
Score: 10 Votes (Like | Disagree)

For me they removed random albums out of their folders and i had to manually drop them back into their folders. I guess i should be glad the albums werent removed all together this time around!

More than 300 million iCloud accounts in the wild—can you imagine what would happen if Apple were as bad at cloud computing as some you believe they are?
Score: 8 Votes (Like | Disagree)

itsmilo
For me they removed random albums out of their folders and i had to manually drop them back into their folders. I guess i should be glad the albums werent removed all together this time around!

EM2013
They tend to have the silliest bugs despite going through 6-7 betas.
Score: 6 Votes (Like | Disagree)
Read All Comments