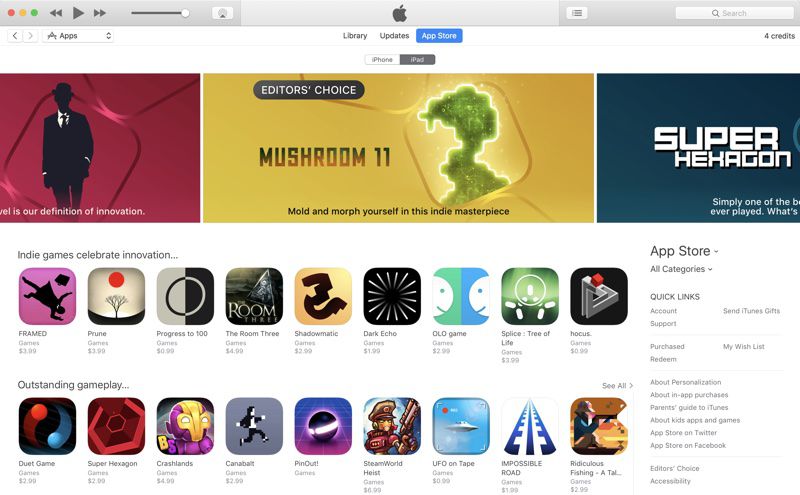 There are also a number of categories that have been updated with a selection of indie games, inclduing "Indie games celebrate innovation," "Outstanding gameplay," "Unforgettable stories" and "Incredible sound design."

According to our sister site TouchArcade, Apple's indie games promotion may be the reason some high profile indie titles are coming out over the course of the next few days, including Bit City, Typeshift, and Card Thief.

Most of the highlighted apps aren't on sale during this promotion, but it gives iOS gamers a way to find quality games that they may have missed.

ArtOfWarfare
It'll be interesting to see what the Switch does to the iOS game market.

You can build Switch games in Unity, same as iOS games. The Switch Dev kit is rumored to be ~$500, so the barrier to entry will be quite a bit lower than on past Nintendo systems.

Will we see a lot of former iOS game developers move to the Switch? Will games made for the Switch come out on iOS?

Could end up being a win-win situation... although the Switch comes with physical controls, whereas iOS games really can't be built with the assumption the player will have a proper controller.
Rating: 2 Votes

It'll be interesting to see what the Switch does to the iOS game market.


Probably not much. The iPhone has had impressive specs for years, but has only managed to cement itself as the king of freemium garbage.
Rating: 2 Votes

It'll be interesting to see what the Switch does to the iOS game market.

Like a big part of iOS users (and Android users), I enjoy the odd game, but I'm not a gamer. IMHO a gaming platform not based Android won't have the chance to change the gaming landscape.

The war has been fought. The Switch - with all its fantastic power and features - will be a niche product. A desirable one, but niche nonetheless. Initiatives like Unity will make the platform a less no-go.
Rating: 1 Votes
[ Read All Comments ]