Cases of cracked iPhone screens are certainly nothing new, and occur often enough to have earned a separate service fee in Apple's AppleCare+ program. According to one study, half of mobile users globally have experienced at least one cracked smartphone screen in their lifetime, and at least 21 percent of smartphone owners currently have a cracked screen.

Presumably with this in mind, Apple is currently exploring technology that can detect when an iPhone screen has suffered damage and alert the user early, even if the break is a hairline crack, which may allow the company to come up with better design solutions in the future. 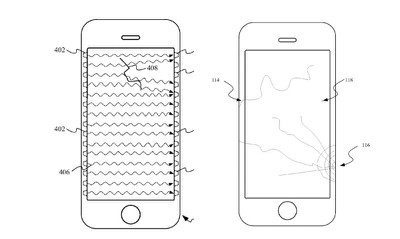 The system appears in a patent published on Thursday by the U.S. Patent and Trademark Office, called "Coverglass fracture detection", which describes an integrated network of sensors and software that can detect the formation of cracks in a protective display cover.

In one example, the invention detects breaches in the touch sensor substrate embedded in the device display. In another, piezoelectric actuators send out vibrations and detect defects by analyzing the response. In yet another instance, strategically positioned emitters shoot out pulses of light through a series of prisms, to eventually reach sensors located on the other end of the display. Measurements then detect anomalies in the travel of light in order to identify micro-fissures in the screen.

The invention is described as being capable of distinguishing between hairline cracks and spiderweb cracks, and even capable of measuring fracture depth, length, width, and expansion rate, with proximity and orientation sensors also recruited into the system to detect falls. User notifications can include pinpointing the area of damage to the screen, as well as alerts about ancillary damage to internal components caused by the impact.

In some embodiments, the user is asked to confirm the location of cracks onscreen by circling the area with their finger. The diagnostic information is then corralled to generate a timeline of events leading up to the crack, which may be useful during repair work. The ensuing data may also be used by Apple to understand how and when cracks most commonly occur, allowing designers to create displays more resistant to breaks.

MrGimper
Presumably with this in mind, Apple is currently exploring technology that can detect when an iPhone screen has suffered damage and alert the user

Wouldn't your eyes be the best method of detecting cracks in the screen?
Score: 7 Votes (Like | Disagree)

Col4bin
How about the easily chipped or scratched chassis, too?
Score: 3 Votes (Like | Disagree)

Presumably with this in mind, Apple is currently exploring technology that can detect when an iPhone screen has suffered damage and alert the user

Wouldn't your eyes be the best method of detecting cracks in the screen?

Not all cracks are perceptible to the eye, I'd imagine. Micro-fissures etc, which take time to propagate and turn into something more visible and nasty.
Score: 3 Votes (Like | Disagree)

Go ahead and rewrite the laws of physics, we'll wait.