Over the course of the last year, there has been ongoing speculation that wireless charging company Energous has inked a deal with Apple and could potentially provide wireless charging technology for the upcoming iPhone 8.

While Energous CEO Steve Rizzone has continually hinted that his company has established an agreement with "one of the largest consumer electronic companies in the world," leading people to believe the partner is Apple, a new investor's note from Copperfield Research outlines why Apple has no plans to use Energous' WattUp radio frequency-based wireless charging solution. 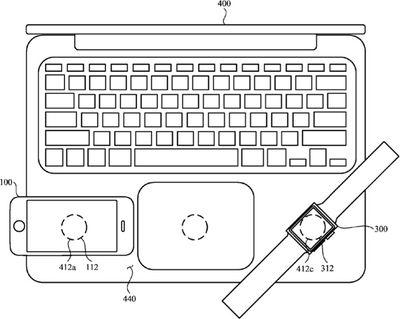 An image from an Apple patent covering inductive charging
The patents by themselves are not a clear indication of Apple's plans, but in one patent filed in 2011, Apple makes its feelings on radio frequency-based charging clear, calling it "very inefficient," "not practical," and potentially hazardous. In the interest of full disclosure, however, the patent was filed before any prospective relationship with Energous.

However, this type of radiative transfer is very inefficient because only a tiny portion of the supplied or radiated power, namely, that portion in the direction of, and overlapping with, the receiver is picked up. The vast majority of the power is radiated away in all the other directions and lost in free space. Such inefficient power transfer may be acceptable for data transmission, but is not practical for transferring useful amounts of electrical energy for the purpose of doing work, such as for charging electrical devices. [...]

In addition, such schemes may pose hazards to objects or people that cross or intersect the beam when modest to high amounts of power are being transmitted.

Furthermore, Copperfield Research suggests both rumored design decisions and recent news that Apple has partnered with Lite-On Semiconductor for wireless charging bridge rectifiers are indications of Apple's plan to use inductive charging.

Bridge rectifiers, explains Copperfield Research, are used to convert alternating current (AC) to direct current (DC), a component needed for inductive charging and one that would not be necessary should Apple be relying on an all-in-one module from Energous.

Adding further credence to Apple's inductive charging roadmap are the consistent leaks from Asian sources that the next iPhone will feature glass casing. Inductive charging does not penetrate aluminum cases effectively, which is the material for the current iPhone casing. One reason Samsung adopted plastic material for its cases is to improve the performance of wireless charging.

A major misperception among tech blogs and WATT investors is that Apple's switch to a glass casing somehow confirms the inclusion of WATT's charging technology. This is ridiculous. The efficacy of RF wireless charging (WATT's technology) is not affected by aluminum or plastic cases.

Many of Apple's inductive charging patents outline the improvements Apple has made in the field over the course of the last few years and give hints as to how wireless charging could work if Apple is indeed developing an in-house inductive charging solution for the iPhone 8.

Patents point towards multiple objects that could provide power, such as a table top with a charging coil built in, a desktop charging station, or even a desktop or notebook computer, which could be used to provide power to an iPhone or iPad. Devices could even share power between one another, suggesting a fully charged iPad could charge an iPhone, or vice versa.

An image from an Apple patent covering inductive charging
Copperfield Research does believe that Apple had a partnership with Energous that gave the Cupertino-based company a way to research radio frequency-based charging without shelling out cash, but concludes that there is an "overwhelmingly conclusive mosaic" suggesting Apple will use in-house inductive charging for the iPhone 8.

Copperfield Research is made up of an anonymous group of researchers that have shorted Watt's stock and may not be entirely impartial, but the evidence they have presented makes a compelling argument for the use of an in-house inductive charging solution rather than a partnership with Energous. 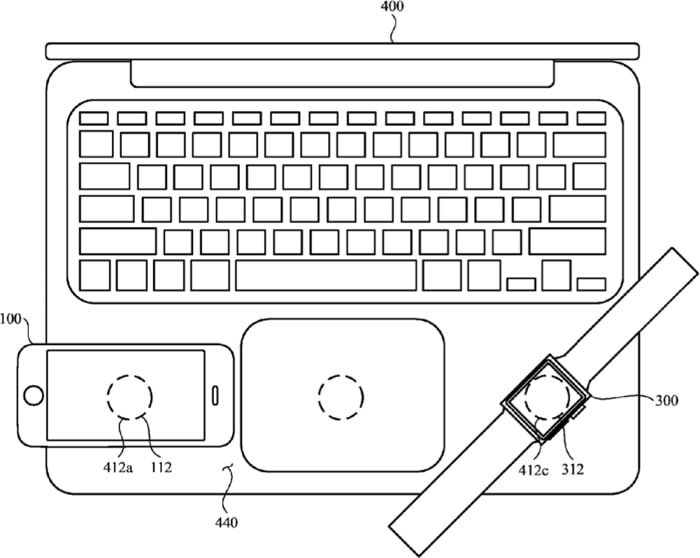 An image from an Apple patent covering inductive charging

Next Macbook Pro feature to be removed: places to rest the palms of your hands when you have attached devices.
Score: 16 Votes (Like | Disagree)

How about waiting what Apple will really do?
This seems to be too far away to get our panties in a twist now.
Score: 9 Votes (Like | Disagree)

soupcan
Oh nononono, you don't put a charging pad in a palm rest. That defeats the entire purpose of a palm rest.

rrrahu1
Am I the only person who sees absolutely no point to wireless charging? As long as you have to stay within a certain proximity of a wireless charging station, how does this free you up in any way? Might as well plug a cable in and get it over with.

Now, if we could wirelessly charge while walking down the street or while on an airplane, that would be something truly useful.

But as long as we are tied down to a radius of 10 feet, I'd rather just use my 9-foot-long lightning cable.

This is even more true with "inductive charging." What benefit does this bring at all? It's just like plugging your phone in, but instead of plugging, you are placing it on a mat? How does this help anyone? Seems to me like people will just have to spend tons more ca$h on Apple's "inductive charging pads."

keysofanxiety
I wouldn't be at all surprised if Apple have an in-house solution, or if they've at least been wrestling and testing the idea for years. No way they'll happily wait for somebody else to invent this technology, which everybody else can use, and then decide to use it.

True wireless charging (not charging on a mat) will really be a game changer and Apple recognise this, though in its very nature it would be very difficult and dangerous to pull off properly. It's not something to release in a rush.

My heart tells me Apple will be throwing the kitchen sink at the 2017 iPhone and blow everybody's minds, though my head tells me they'll continue with their 'S' upgrade cycle and continue to test/refine the iPhone 8 features for release next year. I hope my heart is right. :D
Score: 8 Votes (Like | Disagree)
Read All Comments