In June 2015 it was reported that Apple would renovate its iconic Fifth Avenue retail store, temporarily relocating its operations to the vacated FAO Schwarz toy store in the General Motors Building. A MacRumors reader spotted a new sign in front of the iconic store that reveals the relocation will happen on January 20. 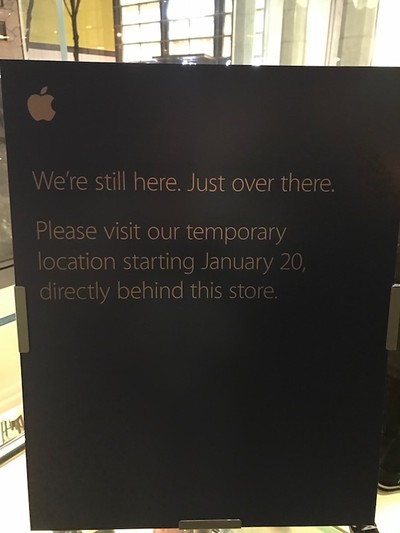 FAO Schwarz vacated its location in the General Motors Building in July 2015 due to the rising cost of rent. The space is just a couple feet away from the iconic glass cube, making the relocation largely seamless for frequent customers of the Fifth Avenue store.

Perfect example for anyone new to Macrumors as far as what to expect in the forums. People will criticize Apple over the most ridiculous things and rarely is anyone happy.
Score: 10 Votes (Like | Disagree)

ThatGuyInLa
No Apple. You're not, "still here."
Score: 9 Votes (Like | Disagree)

DevNull0
I wonder if they're going to flatten the cube into a single sheet of glass flush with the ground level.

It will be courageously thin and think of all the money Timmy will make recycling the glass cube.
Score: 8 Votes (Like | Disagree)

theipodgod16
I worked in that store from 2010-2011. Even back then, the traffic and crowding was unbelievable. Each week, the FDNY would send a fire inspector to see if there were more people than was safe, in case a fire broke out. And each week, they were far over the legal limit. Apple didn't give a ****; they paid the fine each week.
Score: 6 Votes (Like | Disagree)

I know Wall Street and the myriad Apple-haterz continue to claim Apple is going out of business quite soon but these sort of things Apple is doing isn't quite indicative of a company going out of business. A company wouldn't keep renovating old stores and adding new stores at this rate. You can tell how Sears, J.C. Penney and Macys are having a financial crisis as they sell off stores and dump employees. Where is that happening at Apple. It's true I don't really know if Apple is having a financial crisis but spending more money on expansion wouldn't make any sense if they did have a crisis. So what is it that Wall Street knows that I don't? Of course, I also don't understand why Yahoo's share price continues to rise while the company's fundamentals are quite crappy. Yahoo has an EPS of -5.1 and yet the stock has risen over 25% this past year. Apple has an EPS of about 8.3 and the stock has risen just 3% in 2016. I just don't get it. There are so many mixed signals with Apple so it's hard to tell who's telling the truth about the company. If Apple were in financial trouble they shouldn't be doing any renovations or expansion.

Apple isn't going out of business, nor are they anywhere even remotely close to what it would take for them to shut down. That is something said by the 1-5% of the tech population that come on these sites and forums because they are angry the MacBook, iMac or iPhone didn't have the feature or specs they wanted or because they prefer another brand product and want to make Apple seem like they are in trouble. On a general consumer level, Apple is doing just fine.
Score: 5 Votes (Like | Disagree)

MICHAELSD
Did some digging for data:

Abercrombie pays annual rent of $12.5 million for a 25,000 square foot shop on Fifth Avenue. Apple probably pays more per square foot for its more prime location but regardless they are turning a serious profit in a location with incredible marketing value.
Score: 5 Votes (Like | Disagree)
Read All Comments

Wednesday July 8, 2020 3:14 pm PDT by Juli Clover
Apple is working on Macs that use its custom Apple-designed Apple Silicon chips instead of Intel chips, but Apple has committed to continuing to support Thunderbolt, reports The Verge. In a statement, an Apple spokesperson said that Apple's upcoming machines will offer support for Intel's Thunderbolt USB-C standard. "Over a decade ago, Apple partnered with Intel to design and develop...
Read Full Article • 210 comments