Apple Maps has been updated with comprehensive transit data for Great Britain, beyond the London area already supported. 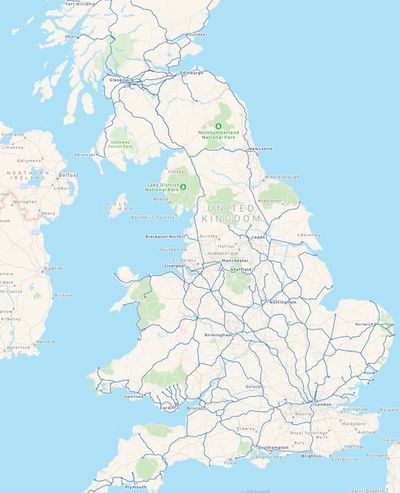 Transit directions by bus, train, or tram are now available within and between large metropolitan areas such as Birmingham, Manchester, Liverpool, Newcastle, Sheffield, Glasgow, Edinburgh, Leeds, Bradford, Bristol, Portsmouth, Nottingham, and Cardiff, as well as other regions in England, Scotland, and Wales.

Transit coverage extends to a number of mid-size cities, small towns, and rural areas as well. Directions are available between Bath and Brighton, for example, and most other searches between any two areas in England, Scotland, and Wales yielded at least one available route in Transit mode.

While transit coverage is now comprehensive throughout much of Great Britain, directions remain unavailable in Belfast and elsewhere in Northern Ireland, which lies within the United Kingdom. Transit directions are likewise unavailable in the neighboring Republic of Ireland.

Mac Rules
Southern Rail is easy; there are no bloody services running :)
Score: 23 Votes (Like | Disagree)

GadgetBen
There won't be anything running when it starts snowing
Score: 4 Votes (Like | Disagree)

Southern Rail is easy; there are no bloody services running :)

Southern Rail directions would just be to take a car.
Score: 4 Votes (Like | Disagree)


Apple Maps has been updated with comprehensive transit data for the United Kingdom, beyond the London, England area already supported.

Why do you say London, England when you have already referred to the UK? Do you think that your readers will get this London confused with say, London, Ontario?
Then later the article goes on to mention a number of towns and cities without mentioning the country where they are located?
Please be consistent. We don't talk about New York and say, New York, New York.
Score: 3 Votes (Like | Disagree)

So, only trains? What about buses, underground, etc.?

Maybe you should read the article, it might answer your question.
Score: 3 Votes (Like | Disagree)
Read All Comments