The 12.5.4 update brings context sensitive tools to the OLED keyboard strip that dynamically change based on the current task. For example, on the Media page, users can instantly add the current clip to a bin, switch between icon and list view, display clip attributes, search media and show metadata simply by tapping on the Touch Bar. 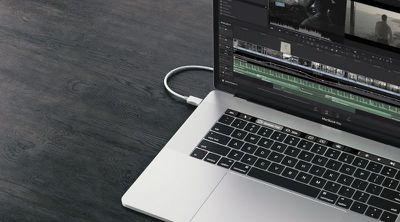 When editing video, the Touch Bar is context sensitive and displays commands based on whether the media pool, source viewer or timeline are selected. Customers can quickly switch between trim modes, navigate the timeline and perform different types of edits without ever having to use the mouse or pull down menus.

Colorists can use the Touch Bar to do everything from adjusting primary sliders and color wheels, to changing mid tone detail, saturation, tint and more. The Touch Bar can be used to save or wipe gallery stills, toggle viewer modes, work with split screen mode to compare shots and even use multi touch gestures to adjust multiple color parameters, such as printer lights, at the same time.

The update also brings support for Rec. 2100, a superset of Rec. 2020 that defines high dynamic range (HDR) formats. New sliders have been added to control Dolby VisionTM analysis data, while support has been added for Grass Valley HQ and HQX codecs on Mac, among other additions.

The touch bar offers very little for pros. I'd rather move my mouse around the screen than engage in the horrible ergonomic insanity that is the touch bar. Using it just confuses me. Why does anyone think that this makes things better? A touchscreen would be much better.

I'll keep my hand on my mouse thank you.

Well the MacBook Pro is used a lot in creative endeavours such as editing with the incredibly powerful fcpx. And the touch bar is intuitive and speeds up the work flow. Editing or designing in a computer with touch screen would strike me as an unergonomic use of the tool. You would have fingerprints all over the very screen you need to see fine detail ala photoshop fcpx etc. For me it would be counterproductive. The touchbar circumvents this. Well done Apple

Xavier
DaVinci Resolve is really exciting software. It honestly is a better software now then Final Cut Pro X. For me, I might have to make a larger switch to Resolve
Score: 2 Votes (Like | Disagree)

I'd much rather Apple focus on more power, better display (perfect blacks would be awesome), and a fanless cooling system.

What you wanted in bold contradicts each other as more power will require better thermal, and fans is needed to pull in cold air and push the hot air out.

At the moment, Nvidia cards run at 75W and above requiring what I've just mentioned, whereas the Radeon Pros runs at 35W and while still requiring fans, is able to operate at lower temperatures at a longer time (hence less fan noise). They're some videos on YouTube where the reviewer remarked that the new MBPs is much quieter then last gen models.

Perfect blacks will only happen when Apple moves to OLED panels. And Apple still have to wait for the OLED panels to support at least the color space Apple used in the current gen MBPs. Other then that, what other problems do the MBPs have with their displays? If I recall it also has one of the brightest displays in a notebook
Score: 2 Votes (Like | Disagree)

Kabeyun
From the beginning I thought that a strip of keyboard that changes with context can't possibly be a bad thing, and a strip makes more sense than discrete dynamic keys because you can turn a strip into keys but you can't turn keys into a slider. That dramatically broadens its potential.

I swear I'm saving all these whiny posts about the touch bar to be reposted when the thing takes off. The rapid pace of devs playing with it should be a clue to the haters that Apple may (shudder... no way!) be on to something.
Score: 2 Votes (Like | Disagree)

triton100
Good to see PRO APPLICATIONS getting on board so quickly with the touch bar. Hopefully the annoying noise coming from touch bar haters will begin to die down.
Score: 1 Votes (Like | Disagree)

Just wondering...
I think the touchbar can be cool... but...

Wouldn't it be cooler if there was an iPad extension, like attach your ipad and each program/software can turn the iPad screen into a touch screen control panel with quick access to button and controls... you can use an iphone too.

That would be cool. Kind of like Procreate does on the iPad with the watch - it moves the palette to the watch so you can touch-select your colors.
Score: 1 Votes (Like | Disagree)
Read All Comments