Apple is in late-stage discussions with the National Hockey League regarding a "major partnership" that could see iPads and other technologies implemented on team benches and elsewhere in arenas, according to Canadian sports network TSN. 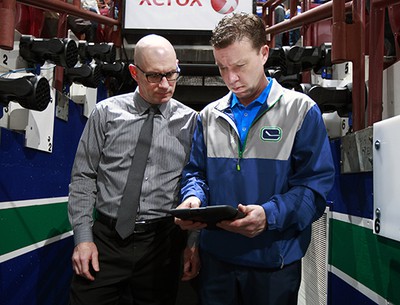 (Source: Getty Images)
The report claims the NHL has been in negotiations with Apple and Microsoft for several years, adding that talks with Apple have accelerated recently after similar talks between Apple and the National Basketball Association failed to materialize.

“The NHL Apple deal is more a major partnership than a sponsorship,” said a source familiar with the NHL’s plans. “Right now, some teams have iPads or other tablets and some don’t. Some have good Internet connections, some don’t. This deal is about having a consistent platform that every team can use in every rink.”

Major League Baseball's digital operation BAMTech has been involved in the negotiations, after reaching a six-year deal with the NHL last year for the rights to distribute live out-of-market games, according to the report.

The deal could resemble a $400 million partnership between the National Football League and Microsoft, ongoing since 2013, which provides team coaches with Surface tablets to use on the sidelines during football games.

The Walt Disney Company acquired a minority 33% stake in BAMTech earlier this year.

Minnesotan is the first to comment on the hockey story! :D

Our team needs to use iPads to Google how to score goals.
Score: 8 Votes (Like | Disagree)

Our team needs to use iPads to Google how to score goals.

Smart. A lot of NHL teams are already using iPads on the bench.

Can someone explain why there needs to be some "deal" or "partnership" between Apple and the NHL? I mean, the NHL makes so much freaking money as do the teams, and they can't afford to buy each team a few iPads?

Is the NHL asking for free iPads or what? Maybe some of the underperforming players can take some of their Million dollar salaries and buy a few iPads for the team?

It's what's known as a cooperative marketing effort.
It benefits the NHL and Apple.
The NHL get a few thousand iPads and association with Apple's halo
and Apple gets to target a sports demographic that taps
a potential customer base that they haven't reached before.
Score: 2 Votes (Like | Disagree)

So how long will it be until we see some fed up coach throwing it against the wall in disgust like Belichick & his surface?

A waste of money....the viewership is low and just how many people watching a game are going to say,"Gee I need to get an iPad because they're using one?" Just look at Microsoft's Surface product placement all over NFL games. NFL is the most watched sport and they still can't move a fraction of the numbers that the iPad is.

Airlines all across the country use them as electronic flight bags for the pilots; that doesn't mean that each pilot is hoping you see him use it to try and advertise iPads.
Score: 2 Votes (Like | Disagree)
Read All Comments

Friday June 5, 2020 7:06 am PDT by Eric Slivka
Roughly four months after hitting an all-time high just before financial markets and economies faltered in the face of the current public health crisis, Apple's stock price has returned to those levels and has set a new all-time high today. Apple's previous intraday high of $327.85 was set on January 29, and that high-water mark was surpassed just a few minutes ago as it hit $328.00 before...
Read Full Article • 65 comments