Apple today officially launched Single Sign-on, the service designed to allow cable subscribers to sign in once with their cable credentials to gain access to all cable-restricted content in iOS and tvOS apps.

Single Sign-on is limited to the United States, and according to a support document, is available for the following providers: CenturyLink Prism, DirecTV, Dish, GVTC, GTA, Hawaiian Telcom, Hotwire, MetroCast, and Sling.

While Single Sign-on was introduced and tested in the tvOS 10.1 and iOS 10.2 betas, the feature was remotely released today to all iOS 10 and tvOS 10 devices. Using Single Sign-on does not require one of the betas, and is instead immediately available to all iPhone and Apple TV users running iOS 10 or tvOS 10. 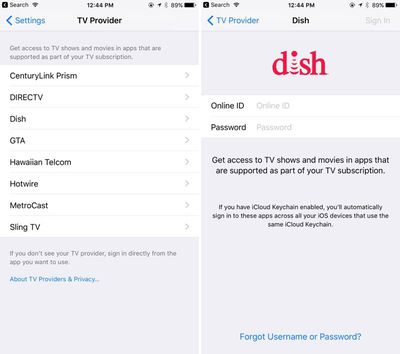 With Single Sign-on, customers with a supported provider will use the Settings options in iOS or tvOS to sign in with their cable credentials. From then on, when accessing a supported app that requires a cable subscription, the app will ask to use the saved sign-on credentials.

Most cable channels and content providers offer individual apps on the Apple TV and iOS devices, but still require cable authentication before users can access content. Prior to Single Sign-on, customers were required to enter their credentials in each individual app, a frustrating and time-consuming process.

Single Sign-on will play a key part in the upcoming "TV" app that's set to debut in iOS 10.2 and tvOS 10.1. The TV app serves as sort of an Apple-designed television guide that lets customers find new content and keep track of what they were watching across multiple devices.

At the current time, Single Sign-on is available to a limited number of customers, but its availability will expand as Apple signs the necessary deals with cable providers. Single Sign-on also requires apps to implement support for the feature, and many apps have not yet introduced Single Sign-on support.

Comcast is absolutely worthless and a bottom feeder provider. But they manage to survive.
Score: 8 Votes (Like | Disagree)

I'm so pissed off that U-verse isn't supported. I've been chatting with a tech. No date for SSO yet.

It's really not something to get all huffy about. Just sign in to the apps you want to use. Makes life a tad bit easier, but getting "so pissed" is a bit overboard.
Score: 6 Votes (Like | Disagree)

auriconis
Shocking, Veri-suck is late to the game. I'm sure this feature will be supported by them in iOS 13.
Score: 6 Votes (Like | Disagree)

dannyyankou
Come on Verizon, get off your lazy ass and get this done
[doublepost=1481057780][/doublepost]

Glad they got all the major service providers on board!

You forgot the /s
Score: 5 Votes (Like | Disagree)
Read All Comments

Thursday September 29, 2022 12:38 pm PDT by Juli Clover
Tony Blevins, Apple's vice president of procurement, is set to depart the company after he made a crude comment about his profession in a recent TikTok video, reports Bloomberg. Blevins was in a video by TikTok creator Daniel Mac, who was doing a series on the jobs of people he spotted with expensive cars. After seeing Blevins in an expensive Mercedes-Benz SLR McLaren, Mac asked Blevins what ...
Read Full Article • 706 comments