In a new Bloomberg interview with Steve Ballmer, the former Microsoft CEO revisited his famously dismissive remarks about the iPhone when it launched back in 2007.

Shortly after Steve Jobs revealed the first iPhone, then-Microsoft CEO Ballmer was asked what he thought of the device during a press conference. 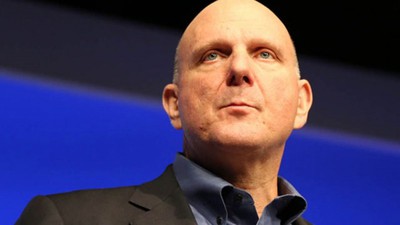 500 dollars? Fully subsidized? With a plan? I said that is the most expensive phone in the world. And it doesn't appeal to business customers because it doesn't have a keyboard. Which makes it not a very good email machine. ... Right now, we're selling millions and millions and millions of phones a year. Apple is selling zero phones a year. In six months, they'll have the most expensive phone by far ever in the marketplace.

Speaking to interviewer Emily Chang recently, however, Ballmer praised Apple's cellular subsidy model and admitted he wished he had come up with it first.

I wish I had thought of the model of subsidizing phones through the operators. People like to point to this quote where I said the iPhones will never sell. Well the price of $600 or $700 was too high and it was business model innovation by Apple to get it essentially built into the monthly cell phone bill.

Ballmer also admitted it was a mistake for Microsoft not to make handsets and tablets sooner. "I would have moved into the hardware business faster and recognized that what we had in the PC, where there was a separation of chips, systems, and software, wasn't largely going to reproduce itself in the mobile world," he said.

Steve Ballmer is asked about Apple's iPhone in 2007
Ballmer revealed his decision to take Microsoft into the hardware business contributed to the breakdown of his relationship with co-founder Bill Gates. "There was a fundamental disagreement about how important it was to be in the hardware business," Ballmer said. "I had pushed Surface. The board had been a little reluctant in supporting it. And then things came to a climax around what to do about the phone business."

Microsoft entered the hardware market in 2012 with the Surface RT tablet, which sold poorly and saw the company take a $900 million charge to write down the value of inventory. Since then, Microsoft's Surface range has taken off, and generated more than $4 billion in sales for the company for the fiscal year ending June 2016.

Nicksd84
"You can’t connect the dots looking forward; you can only connect them looking backwards."

Euphemia
Back in 2000, I bought my Nokia 8250 on a phone subsidy in Australia. Phone subsidies have been a common practice for a very long time. I'm not sure why Apple is getting the credit for it.
Score: 13 Votes (Like | Disagree)

the8thark
Ballmer was not wrong. That's the thing.
Apple realised the truths in what Ballmer said and worked on them to make the iPhone sell. If everyone had to pay $750 or more outright for their iPhone, no one would. The whole phone plan subsidising where you get to pay off the cost of the phone along with your bill over 24 months is what really allowed the iPhone to take off.
It was comments like Ballmer's that prompted Apple to go for the subsidised approach.

The interviewer is asking Ballmer - Why is MS not doing what Apple does?
His answer is so captain obvious - Because MS is MS and not Apple.
Score: 12 Votes (Like | Disagree)

Smartass
took him long enough to admit it.

infinitejest
Apple managed to build the first great phone. The business model existed before...
Either he still doesn't want to give Apple credit for it or he's really that much of an idiot and is still not getting it.
Score: 5 Votes (Like | Disagree)

MrX8503
Ballmer is having trouble admitting the real reason why he was wrong.

The iPhone wasn't successful because of the subsidized model, which existed prior to the iPhone. The iPhone was a success because it was simply a way better phone.

Ballmer not admitting this is the reason he's not the CEO.
Score: 4 Votes (Like | Disagree)
Read All Comments

Saturday May 30, 2020 4:00 pm PDT by Eric Slivka
Apple today doubled the price for upgrading the RAM on the entry-level 13-inch MacBook Pro, with customers in the United States now being charged $200 to move from 8GB to 16GB compared to the previous $100 upgrade price. Similar increases are seen in other countries, such as moving from €125 to €250 in Germany and from £100 to £200 in the United Kingdom. Current pricing on RAM upgrade for ...
Read Full Article • 301 comments

Monday June 1, 2020 7:50 am PDT by Joe Rossignol
If you are still hanging on to a Mid 2012 model of the 15-inch MacBook Pro with a Retina display, and require a new battery or other repairs, be sure to book an appointment with a service provider as soon as possible. In an internal memo today, obtained by MacRumors, Apple has indicated that this particular MacBook Pro model will be marked as "obsolete" worldwide on June 30, 2020, just over...
Read Full Article • 159 comments