Macy's today opened a new hub dedicated to Apple products at its flagship Herald Square store in Manhattan, becoming the first U.S. department store with a shopping area devoted to the brand, reports The Associated Press. 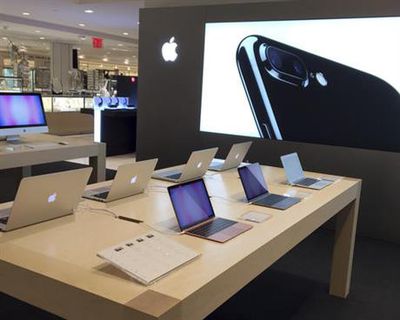 The store-within-a-store concept, similar to those found in Best Buy and Walmart stores, has four light wood tables featuring a wide range of Apple products, including the Apple Watch, iPhones, iPads, iMacs, and MacBooks.

"This is one of the most sought-after products," Terry Lundgren, the outgoing CEO of Macy's, told The Associated Press. "We really cater to women better than most retail stores do. I do think that we are going to end up creating a business that is more female-friendly.

Macy's new Apple partnership, in the works for years, comes as the department store chain aims to reverse six straight quarters of declines for a key sales measure. Macy's is collaborating with other brands to create a so-called mini-mall.

The dedicated Apple section, located near the main 34th Street entrance, will be densely staffed to accommodate the 35,000 to 40,000 customers, and up to 75,000 during the holidays, that visit Macy's Herald Square location each week.

Best But has a dedicated section.

If you live somewhere that doesn't have an Apple store, I guess this is a good thing. And you don't have to show up at a Wal Mart, also a good thing. But really, is this truly relevant? Does Apple really need all this extra presence, especially when it's not the full-on Apple store experience that actually sets Apple apart and gives it that specialness? It's like putting Apple in those mall kiosks. It's the opposite of special. It equates it to low-budget junk. Department stores are in the middle somewhere.

Every customer going through this store sees Apple products all grouped together and laid out and can use them. There are people who don't use Apple products or avoid Apple stores or who don't get time to go through the crowds there. These people may see the Apple stuff and use one or two. They may order there or it may inspire them to order online later. It's an advertisement as much as anything else.
Score: 8 Votes (Like | Disagree)

adamjackson
This is hardly a new concept and interestingly enough, Steve killed these when he came back to Apple. The only store within a store left long after Apple Stores started opening was the ones in CompUSA as they were staffed by Apple Employees.

Back in the day, Apple computers were in Sears, Circuit City, Fry's and all kinds of general stores and they were awful. If Apple has their own employees staffing it, there's hope. If not, it'll just turn into a run-down part of the store where people come in with questions and the lady who specializes in blenders will shrug at questions and ignore customers.
Score: 8 Votes (Like | Disagree)

SteveJobs2.0
Best But has a dedicated section. It doesn't do much different than when it was a section of Apple products arranged by Best Buy itself. There is more branding, but they are still using the same employees and carry about the same number of products, so it's not a major change for retailers that already carry Apple products.

If Apple could arrange for these stores to handle product repairs, then it would make it much easier for consumers to feel that they don't need to be close to an Apple Store to receive quality service.
Score: 7 Votes (Like | Disagree)

redscull
If you live somewhere that doesn't have an Apple store, I guess this is a good thing. And you don't have to show up at a Wal Mart, also a good thing. But really, is this truly relevant? Does Apple really need all this extra presence, especially when it's not the full-on Apple store experience that actually sets Apple apart and gives it that specialness? It's like putting Apple in those mall kiosks. It's the opposite of special. It equates it to low-budget junk. Department stores are in the middle somewhere.
Score: 7 Votes (Like | Disagree)
Read All Comments