Over the past week, a sticker pack that mimics the design of the iconic bubbles in the Messages app has rocketed to the top of the Messages App Store charts, but its popularity will be short-lived as Apple is going to pull it from the App Store.

Phoneys, currently the number two paid app in the Messages App Store in the United States, features chat bubble stickers that you can place over real messages, making it look like friends and family have said humorous things they didn't actually say. Examples include "You're my hero," "The sports team I pull for sucks," and "My political views are totally wrong." 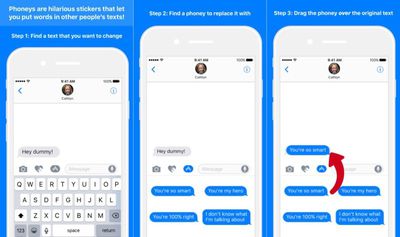 Given the popularity of Phoneys, it has, unsurprisingly, attracted Apple's attention, and the Cupertino company has taken issue with the app. In a phone call, an Apple employee told Phoneys developer Adam Howell that his sticker pack can't use the San Francisco font and it can't emulate the look of Messages chat bubbles. Furthermore, Apple said "prank" apps are not allowed in the App Store.

Apple's lawyers weren't happy that Phoneys got through the review process. The stickers couldn't be blue or green, they couldn't use San Francisco as the typeface, and the app could no longer be marketed as a "prank" app, because Apple doesn't approve prank apps (even though I myself had never used the word "prank" when marketing Phoneys, others did, and I certainly understood where he was coming from).

Apple is not pulling the app from the App Store immediately, but has given Howell a week to change the look of the app so that the text bubbles no longer resemble Messages chat bubbles. He's been asked to change them to "comic book cartoon bubbles," and if that doesn't happen, Phoneys will be removed by Apple.

Howell has not yet decided whether he'll leave the app as is for the people who already purchased it or if he'll update it with a new look as instructed by Apple so that he can continue providing updates and new content going forward.

Phoneys continues to be available from the App Store in its current incarnation for $0.99 [Direct Link], but potential buyers should know that it's either never going to see another update or it'll be updated to look significantly different.

This app could, and would, end up used very maliciously.
Score: 43 Votes (Like | Disagree)

reden
Apple: Lets allow people to have fun with our Messages app! Okay, not that much fun.
Score: 29 Votes (Like | Disagree)

For use on THEIR platform. Why yes they are and can.
Score: 24 Votes (Like | Disagree)

Because there is no way this app could possibly cause problems. It clearly must be because Apple is defending their invention of the color blue and green and the chat bubble shape.
Score: 13 Votes (Like | Disagree)

While it's entertaining to think about, that's not the point, is it? This is about degrading the user experience through deceptive "stickers". Makes perfect sense why Apple would disapprove of that, and you would, too, if you were in Apple's shoes.
Score: 13 Votes (Like | Disagree)

pwhitehead
Is #apple really taking ownership of a shape and a color?
Score: 10 Votes (Like | Disagree)
Read All Comments

Saturday February 4, 2023 10:05 am PST by Eric Slivka
Online retailer TigerDirect has slashed pricing on the M1 iPad Air in several colors, offering the base 64GB configuration for just $313.99 in Purple and Pink. Note: MacRumors is an affiliate partner with TigerDirect. When you click a link and make a purchase, we may receive a small payment, which helps us keep the site running. That's a savings of 48% compared to Apple's normal $599.00...
Read Full Article • 541 comments

Saturday February 4, 2023 1:30 am PST by Hartley Charlton
Google's Chromium developers are working on an experimental web browser for iOS that would break Apple's browser engine restrictions, The Register reports. The experimental browser, which is being actively pursued by developers, uses Google's Blink engine. Yet if Google attempted to release it on the App Store, it would not pass Apple's App Review process. Apple's App Store rules dictate...
Read Full Article • 297 comments