Some users are reporting performance issues with Logitech's mice accessories after updating to macOS Sierra, mostly citing problems centered around "laggy" scrolling and some unresponsive customized buttons. Users have specifically mentioned that the M705 Marathon Laser Mouse and Performance Mouse MX are among products affected, but a wider swath of Logitech's mice lineup is likely included.

The reason behind the problems, and how wide it could reach, is because of an incompatibility issue between the Logitech Control Center app and macOS Sierra. As mentioned by a poster on the Logitech forums, on the latest 3.9.4 software for LCC, the M705's forward and back buttons were reported as "not working," while scrolling was being problematic as well. 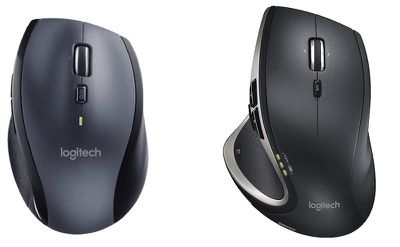 The M705 Marathon Laser Mouse (left) and Performance Mouse MX (right)
A separate report, posted on StackExchange, detailed a similar issue with Logitech's mice on macOS Sierra. The user described their mouse as having "soggy inertia" scrolling in native Apple apps, and "choppy" scrolling in third-party apps. Ultimately, they found that updating to macOS Sierra "wrecked scrolling" on the Logitech mouse.


The scrolling behaviour is erratic because I'm actually assaulted by two issues:

In native macOS applications, like Apple Calendar, there is an ”inertia-ish” effect that slows down the scroll and introduces some sort of acceleration-like movement akin to the worst nightmares from Windows 10.

In third-party applications, like Google Chrome, the scrolling is quite fast but not fluid; it's choppy and non-linear with sudden jumps and stops. Because of this, it feels like the computer is laggy when scrolling a page, but it's probably due to the way the software scrolls.

The Logitech Control Center Mac app allows users to customize the features of their Logitech accessories -- mainly mice and keyboards -- along with basic features like notifications for low battery life and when each device has a firmware update. Its incompatibility with Sierra appears to be the source of the problem users are describing online. Unfortunately, Logitech has confirmed that "LCC is not available on Mac Sierra," and that "there is no release date known" for when it might launch.

Hello all!
Thank you for your feedback. Your comments will be transferred to the appropriate department.

As of right now, LCC is not available on Mac Sierra. And there is no release date known.
Once it is available, it will be posted.

The same user who mentioned "wrecked scrolling" did appear to find some solutions to the problem, although they noted that everything was just "temporary band-aid tweaks" in the face of Logitech's lack of support. The user noted that messing around with the scroll and zoom settings in System Preferences > Mouse could help slightly, as well as checking out System Preferences > Logitech Control Center > Vertical Scrolling.

Why would anyone use this atrocity of a thing on a beautiful Mac?

Because it's way more ergonomic then the atrocity that is the Magic Mouse. Plus I can charge and use my MX Master at the same time.
Score: 36 Votes (Like | Disagree)

venom600
I have an MX Master with LCC on Sierra and haven't noticed any scrolling issues.

Why would anyone use this atrocity of a thing on a beautiful Mac?

The sad part is that you aren't joking, are you?
Score: 20 Votes (Like | Disagree)

If you bought a peripheral that needs a control panel to interface with it...you're doing mac wrong

So using that logic no one should use a graphics tablet or anything that offers features that aren't directly supported by the OS. You couldn't sound more ludicrous if you tried. Did you actually think that through before you posted it?

If I need a specific app or a specific piece of hardware and that equipment doesn't work after an extensive and long beta period before an OS release, I would stop buying software or hardware from that company.

Show me a better, more functional mouse than the MX Master and I'll switch. You won't. I waited years to get a mouse like this. A driver hiccup is worth the positives.
Score: 13 Votes (Like | Disagree)

Cougarcat
Haven't used a Logitech mouse in years, but I remember the LCC app being hot garbage.
Score: 9 Votes (Like | Disagree)

844957
If you bought a peripheral that needs a control panel to interface with it...you're doing mac wrong
Score: 7 Votes (Like | Disagree)

Aldaris
I can imagine the email response...

I love the graphic user interface but the mouse broke...
-Steve

Steve,
Can I interest you in a Magic Trackpad?
-Phil