Apple has taken its online storefront down in order to prepare for the launch of the iPhone 7, the iPhone 7 Plus, and the new Apple Watch Series 2 models. Pre-orders are expected to begin at 12:01 a.m. Pacific Time or 3:01 a.m. Eastern Time on Friday, September 9.

Pre-orders will be available through Apple's website, the Apple Store app, several carrier sites, and from major retailers like Target and Best Buy. 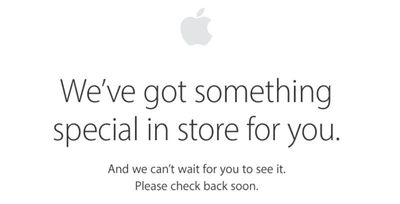 Apple's iPhone Upgrade Program is available in the United States, United Kingdom and China, allowing customers pay a monthly fee for their iPhone 7 with the option of trading it in after 12 months of payments. Pricing, which includes AppleCare+, starts at $32.41 for the iPhone 7 and $37.41 for the iPhone 7 Plus.

tatsumi
Please everybody, hate and don't buy the iPhone 7/7 Plus. It is a terrible device, you have to boycott Apple for the missing headphone jack!

We need to stay together! Nobody should be ordering an iPhone 7/7 Plus!

so that I can order mine and get it delivered on release day!
Score: 34 Votes (Like | Disagree)

So no 64GB. Another good reason to pass on a new iPhone this year.

P.S. I found some interesting charts:

iPhone users who use headphones NOT found in the box already
##########

iPhone users who use WIRED headphones not found in the box
#######

iPhone users with more than ONE pair of wired headphones
#

iPhone users can afford multiple wired headsets they care about, but cannot afford a $9 second adapter so they can avoid the moving the free adapter
,

iPhone users who have this problem now and will have the same problem in a year
.

iPhone users who truly do have to charge while using wired headphones with the screen off, despite the new battery life increases
|

iPhone users who truly have to charge while using wired headphones but cannot afford a small third-party Y-connector that sits on their desk, adding zero additional cables compared to their old way
.

iPhone users who play iPhone audio through their car without Bluetooth
#####

iPhone users who play car audio without Bluetooth and aren't just unaware: they truly cannot use USB to carry the audio as well
#

iPhone users who play car audio without Bluetooth, cannot use USB for the audio, and cannot afford a Y-adapter that stays in the car
|

iPhone users who fall into all of those categories, cannot afford a Y-adapter, but who CAN afford this new phone
.
Score: 10 Votes (Like | Disagree)

For the first time ever I'm going to pass. A decision made easy by this lackluster phone with no headphone jack.