Tapbots, the developers behind popular Twitter client Tweetbot, today announced a public beta for their latest app, Pastebot. Pastebot is a clipboard manager for Mac designed to store everything you copy so that it can be re-accessed at any time.

Available as both a Mac menu bar app and a standard app, Pastebot supports Pasteboards, where snippets of text that you frequently copy and paste can be quickly accessed. Multiple Pasteboards can be created to keep all text clippings organized and the clipboard can be opened with a simple Command + Shift + V keyboard shortcut. 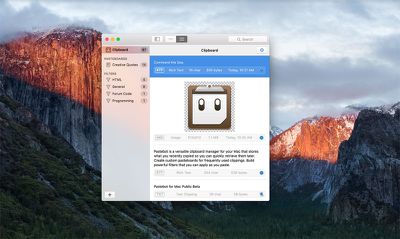 A range of filters are available that can be applied to copied text snippets for formatting purposes. Filter examples include Create List, Wrap in Paragraph Tags, Convert to Plain Text, Change Case, Emoji Remover, and more.

For the time being, syncing Pastebot content between Macs is not available because the feature uses CloudKit, which isn't available outside of the Mac App Store. Syncing will be available when the full app is released and Tapbots says Pastebot will work alongside with the new clipboard sharing features built into macOS Sierra.

The Pastebot public beta can be downloaded immediately from the Tapbots website. Following the beta testing process, Pastebot will be released on the Mac App Store as a paid app.

utdrmac
Been using this for ages: http://jumpcut.sourceforge.net/
Still works on 10.10. Stupid simple if you don't need fancy HTML/images stuff.
Score: 3 Votes (Like | Disagree)

FWIW, PasteBot was a Tapbots app for iOS for quite some time and had an associated Mac sync app. Both have since been withdrawn. So this is a bit more like a (Hollywood-style) reboot than an entirely new app.

In more ways than one: it's based on the author's older Mac app, PTHPasteboard Pro.

It'll be nice to have a clipboard manager app with a nice interface. I've been using the minimalistic FlyCut because I didn't like the looks of the more complicated ones. Hope syncing will work without continuity/handoff support, unlike Apple's version.
Score: 2 Votes (Like | Disagree)

FWIW, PasteBot was a Tapbots app for iOS for quite some time and had an associated Mac sync app. Both have since been withdrawn. So this is a bit more like a (Hollywood-style) reboot than an entirely new app.

The reboot needs an iOS app to competitive with the likes of Copied
Score: 1 Votes (Like | Disagree)

Neither will stand a chance. Past still doesn't have an iOS app. Love'em or hate'em but Tapbots
gets a LOT of free press and have their fanclub. I suspect they'll overtake all competitors and become
the standard.

My favorite is Copied app (copiedapp.com) but the developer has been silent for two months now. The market is ripe for Tapbots to swoop in and take over.

The iOS app is essential though. That needs to come sooner rather than later.
Score: 1 Votes (Like | Disagree)

This. I'm using Copied, and I like it a lot. Having macOS and iOS apps to exchange material is the best! The Mac app also has a menu bar option that is so useful! The keyboard extension in iOS is also very helpful. I've tried a few of the universal clipboard apps, but for me this one is the best.

That said, I will be very interested in the capabilities of the new universal clipboard that is coming out with macOS Sierra and iOS 10. This will likely wipe out the dead wood third party developers in this space or cause them to step up their game. Hopefully the latter.
Score: 1 Votes (Like | Disagree)
Read All Comments