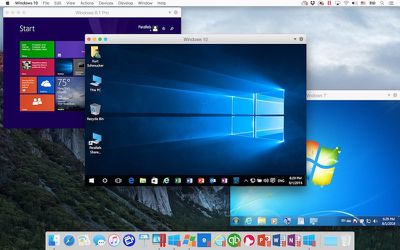 New features in Desktop 12 include having Windows 10 "always on" in the background, the ability to instantly launch Windows apps, the ability to schedule incremental backups and Windows updates, the ability to assign special behaviors to Windows apps, improved integration for Microsoft Edge, Outlook, and Office 365, and Xbox app support. Additionally, Parallels has partnered with Blizzard to provide specific support for the hit game Overwatch.

javco
They make every single MacOs update incompatible with their software. The idea is that you never stop paying them.
Score: 24 Votes (Like | Disagree)

Col4bin
Been running VMware Fusion 8 Pro as my preferred virtualization software on my MBP. While Parallels Desktop 12 does look pretty robust, doubt I'd switch.
Score: 11 Votes (Like | Disagree)

I never understood why people pay for it when virtual box is free. Is it supposed to be faster?

It is much better than Virtual Box, and arguably the best available if you like to work in 'Coherence' mode where windows applications appear to be running in OSX.

The pricing is just outrageous though, in 5 years I would have paid $289.

I am thinking of jumping ship to VMWare.
Score: 10 Votes (Like | Disagree)

I never understood why people pay for it when virtual box is free. Is it supposed to be faster?

It does tend to run a lot smoother and require less fiddling than virtual box, but for most things virtual box is great.

I only upgrade every two years, but each time I do I tend to think it's getting less worth the money.
Score: 8 Votes (Like | Disagree)

wheelhot
I've used both Fusion and Parallels before and has decided to go for Fusion 8 as its cheaper (especially if you have a few Macs) and historically is compatible with new version of OSX, unlike Parallels. Looks like I made the right decision
Score: 8 Votes (Like | Disagree)
Read All Comments